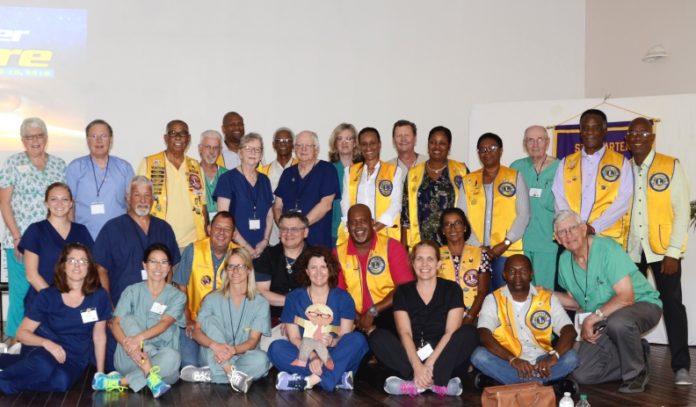 SUCKERGARDEN, Sint Maarten — World Sight Day, observed annually on the second Thursday of October, is a global event meant to draw attention on blindness and vision impairment. It was originally initiated by the Sight First Campaign of Lions Club International in 2000. It has since been integrated into VISION 2020 and is coordinated by IAPB in cooperation with the World Health Organization.
The theme for World Sight Day on October 11th, 2018 is “Eye Care Everywhere” and the President of the St. Maarten Lions Club, Lion Carmen Lake is proud that the club could have contributed heavily to Sight Awareness during the first half of 2018.
Club President Lion Carmen said: “The focus of our big Sight Project from May 14th through 18th, 2018 was to test the eyes of all or most public school children on St Maarten at the Belair Community Center and those who needed glasses received free glasses right away or glasses shipped a few weeks later and delivered to each school. Our club hosted 17 doctors, nurses and technicians from Volunteer Optometric Services to Humanity (VOSH) from all over the US and Alaska, who paid their own tickets to volunteer their time for a week on St. Maarten.
Lion President Carmen continued: ”With the generous sponsorship of US$ 24.000 from Hollywood Casino last December, the club paid for hotel, transportation and meals for the entire visiting group. The rest of money for the project came from various fundraisers during the year such as the Lion Wally Havertong Christmas Bingo and the Father’s Day Car Raffle. The VOSH team were assisted by students from NIPA as well. Additional expenses incurred by our club included renting the Belair Community Center and providing bus transportation to and from school for each student. We really could not pull off that big Sight Project without the support from all of them along with the Immediate Past President Lion Alison and his Board, the Lions Sight Committee and all members of the St. Maarten Lions Club who volunteered for the entire week”.
The 2017-2018 Sight Committee Chairman Lion Lion Davey Woods who spearheaded the project with a team of 8 very active Lion members was very satisfied with the support from all Lions, VOSH and NIPA volunteers during the project. Lion Davey said: ”Unfortunately we did not get test all the school children, although we gave them every opportunity for an entire week to be tested. Some parents and children just did not cooperate and it’s a pity that it just might be one of them that really needed glasses to help them with their education. The support for the project by the Ministry of Public Health, Social Development & Labor and also the Ministry of Education, Culture, Youth & Sports was also tremendous and the project received visits by His Excellency Governor Eugene Holiday, Honorable Prime Minister Leona Marlin-Romeo, then Minister of Education Jorien Wuite and Honorable Chairlady of Parliament Sarah Wescot-Williams who were all impressed with the project and volunteers that helped”.
The St. Maarten Lions Club along with VOSH and helped by NIPA students tested 2795 students and adults over 5 days at the Belair Community Center. 2549 school children were tested along with 246 teachers, Lion members, NIPA volunteers and a few parents who personally brought their children. 479 children received glasses right away and 198 glasses was paid for and FedExed to St. Maarten by VOSH 3 weeks later. A grand total of 677 free glasses were given out to primary school children over May, June and July 2018. The final sets of glasses was delivered before the school term ended at the beginning of July.
Each child that got tested also received a pair of sunglasses that was shipped in advance by VOSH. The teachers, Lion members, NIPA volunteers and a few parents who needed glasses were given prescriptions which they could take to the local Optometrist for new glasses. On the last day, after the project at the Belair Community Center was completed, 3 school children that were hospitalized got tested by the VOSH team and Lions Club members at the St. Maarten Medical Center.
There were 9 referrals with severe issues to the local Ophthalmologist of which 7 were primary school children. The St. Maarten Lions Club paid for the initial visit for all seven children and Sight Committee members accompanied them and their parents to the Ophthalmology Center of Dr. Jean-Paul Cals on French St. Martin. The reasons for those referrals were exotropia, cataracts, amblyopia, keratosis, reduced vision, glaucoma and other health concerns.
The St. Maarten Lions Club is very thankful that it could assist 677 children with free glasses on St. Maarten as most had problems astigmatism and myope or nearsightedness. As part of Lions Club International the club prides itself on being able to assist in eliminating preventable blindness and improving sight awareness.
It was Helen Keller back in 1925, who challenged Lions to be “knights of the blind in the crusade against blindness” and today blindness and its challenges are preventable thanks to the hard work and community service clubs and its members such as the
St. Maarten Lions Club.