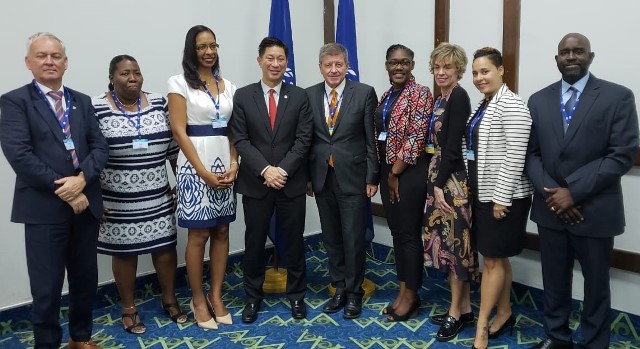 PHILIPSBURG, Sint Maarten — Representatives of the Sint Maarten Tripartite Committee (TPC) delegation recently attended the 19th American Regional Meeting of the International Labour Organization (ILO) in Panama City. The meetings took place from the 1st to the 5th of October 2018. The theme of the meeting was; Preparing the Future of Work we want in the Americas, through Social Dialogue.

“Social dialogue is key to ensuring that countries move forward in the most productive and inclusive manner, raising productivity levels and social standards. Sint Maarten is a forerunner in the region, being one of the Caribbean islands having a full tripartite delegation at the meetings, regular tripartite discussions, relatively low labour unrest and the ability to amicably construct a tripartite consensus document, that considers the concerns of all workers’ and employers’.” – Emil Lee, Minister of VSA

The meetings brought together the political, economic and social actors, represented by members of governments, workers’ and employers’ representatives. Additionally, the meetings highlighted the impact and undying need for effective and continued Social Dialogue, Labour Productivity and Efficient Labour Market Preparedness to ensure “the future of work WE want”.

The Sint Maarten delegation took part in several discussions that have proven relevant to addressing our local labour market conditions. It was a fruitful trip as we were able to exchange and expand on these topics with our regional counterparts. The discussions at the event will benefit our local policy making capacity and also offer the country the needed support towards implementation of these policies while in the process of rebuilding our economy.

The ILO is set to render advice on the extent of maternity and paternity leave to be established on Sint Maarten which would be presented to Parliament. In line with proper tripartism and supporting the social partners; identifying and recognizing employers’ organizations and ensuring training to both the employers’ and workers’ representatives will be a priority of the Ministry of Labour.

The Sin Maarten delegation also got the unique opportunity to meet with the Director General of the ILO, Mr. Guy Ryder. During this meeting, Minister Lee was able to express the need for the ILO to focus more specifically on the necessities of the Caribbean region, particularly post hurricane Irma. Though economic dynamism and innovation is high in the region, productivity remains low. The first consensus document on Labour Reform for Sint Maarten was also presented during this meeting. Minister Lee shared the importance of social dialogue and gave a brief synopsis of the first consensus document, which derived from lengthy tripartite discussions.

The workers’ and employers’ representatives supported these statements by acknowledging the importance of the consensus document and emphasized their desire to receive assistance and/or support from the ILO to be formally trained and locally institutionalized. – Emil Lee, Minister of VSA