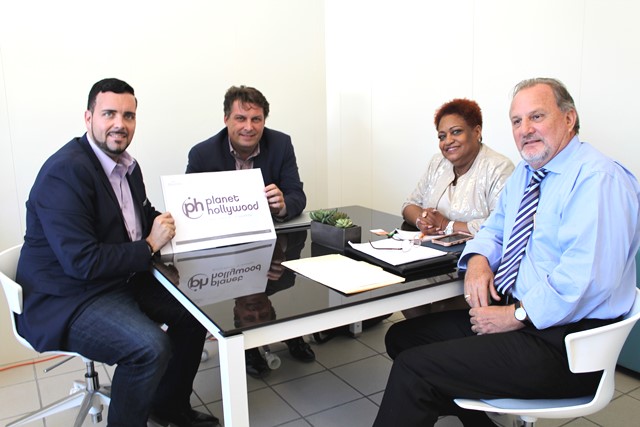 Described as a destination unto itself for accommodations, dining and entertainment, details of the 450 Deluxe rooms of Planet Hollywood St Maarten Resort, were given to Tourism Minister Stuart Johnson on Thursday this week by the developer, Sunwing Travel Group. Sunwing will leverage its unique vertical integration with distribution capabilities supported by airline, retail, and wholesale tour operations, across multiple source markets to maximize the occupancy of the hotel.

Considering that St. Maarten is well known as the Caribbean’s premier entertainment and party destination, the developer has also designed a Sky Lounge and Sports Bar with a Night Club. As part of the new development, Sunwing will reconstruct the water channel which when completed will be an environmentally sound solution to the issues faced with channelling water from the freshwater pond to the ocean at Great Bay.

Demolition of the Great Bay Beach Hotel, which was devastated by hurricane Irma in 2017, began a few months ago and is slated to be completed within the next three weeks. Daniel Diaz Executive Vice President of Hotels & Resorts for Sunwing Travel Group and Keith Graham the local representative for Sunwing met with Tourism, Economic Affairs, Traffic & Telecommunication TEATT Minister Johnson on Thursday, August 2, to discuss the future plans for the famous resort brand.” Regarding the start of construction, Diaz told Johnson, “Once we obtain the permits we will be ready to start construction right away.”

The new facility will be completed within 18- months and is being built to meet Miami Dade standards in the United States based on the need of the developer to consider the hurricane-climate in the Caribbean. Johnson pledged the Ministry’s full support to the developers. He said the new resort will positively transform the destination, and solidify its position as the region’s leader in the hospitality industry. Johnson said an essential component of the development is its significant increase of St. Maarten’s bed occupancy at a time when the country is experiencing a revitalization of its Tourism product.

The direct economic impact of this development will be instantly felt and will pave the way for new local entrepreneurs in the service industry. Johnson said another “important and direct benefit of the investment is the sudden surge in job opportunities for residents.” The developers estimate that when it opens, Planet Hollywood St Maarten will employ close to 1000 people at a ratio of 2.1 per room. In keeping with its employment policy at its other properties in the Caribbean including St. Lucia, Sunwing is committed to maintaining a 97% local employment rate with only 3% earmarked for expats. This development will transform the jobs market because of the labour-intensive nature of tourism and hospitality in general.