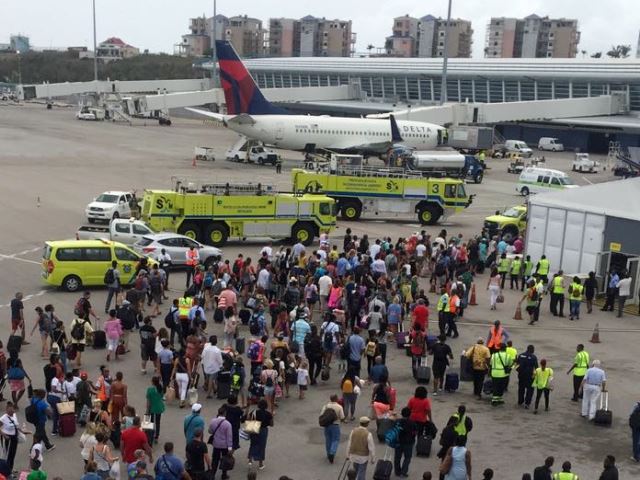 Simpson Bay, St. Maarten – At approximately 1:55pm an alarm was triggered in the Departure Pavilion. The Rescue and Firefighting team (R&FF) responded to the alarm, as everyone vacated the Pavilion. Following an investigation by the R&FF it was later determined that the alarm system showed an active fire fault in the system and the team determined that it was safe to return to the Pavilion.

The Rescue and Firefighting team reset the panel box and declared the situation as a code green, which meant that they could stand down as there was no active fire.

At 3:15pm the alarm sounded once more in the Departure Pavilion and the Rescue and Firefighting team responded once again. The passengers evacuated the building and this time the Red Alert detection technician arrived to check the system. The Red Alert company originally installed the fire alarm system at the Pavilions.

On Wednesday July 18, 2018 yet another alarm was triggered at approximately 10:21am at the Departure Pavilion. Chief of the Rescue and Firefighting Department, Manilo Penijn announced that the technician decided to disable the panel box and is currently busy repairing the faulty wiring. The R&FF team established a fire watch in the Pavilion until the technician completes the necessary repairs.

The Managing Board apologizes for any inconvenience the false alarms may have caused and stressed that the airport does not take the safety and security of its users for granted.