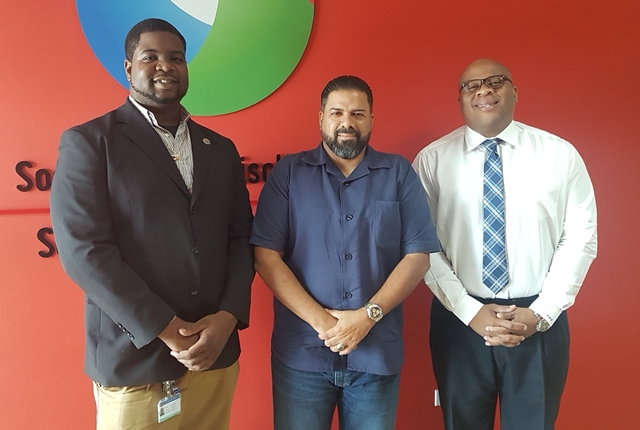 PHILIPSBURG, Sint Maarten — On Monday, July 23rd, Member of Parliament, Mr. Claude Chacho Peterson and Faction Staff Mr. Benjamin Bell, representing the SMCP faction within the coalition, met with the Secretary-General of the St. Maarten Social Economic Council (SER), Mr. Gerard Richardson to receive a presentation at the request of the MP.

The presentation outlined the history, the role, the services and the reports of the SER, which is one of the permanent advisory councils entrusted with strengthening St. Maarten’s Trias Politica system of Government.

MP Peterson brought up the topic of the high remuneration of the Board, as this had been a point highlighted by him in the past via social media and radio. He was very pleased to find out that the high remuneration packages for the Chair, Vice Chair and members of the SER have been reduced by more than 50% as of December 2017.

The MP was quoted as saying: “It is important that these part time Board positions are not remunerated as full time positions. It should be an honor to serve on the board of the SER and being able to give input in advices for the betterment of our island.

Post Irma it is refreshing to see that the SER has taken the initiative to make the necessary amendments to the law, which now puts the Board remuneration package more in line with our sister islands, Curacao and Aruba.”

This decrease represents a savings to Government of over ANG 150,000.00 yearly compared to previous years.

MP Peterson fully intends to stay in touch with the SER and make use of their advices. No longer can we just shelve the relevant and professional reports produced by the experienced SER Staff and Board.