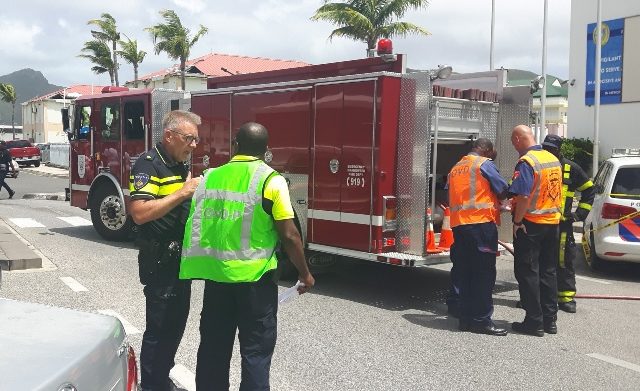 PHILIPSBURG, Sint Maarten — On Monday July 30th at approximately 10.30 a.m. the fire alarm at the Police Head Quarters in Philipsburg went off causing all employees in the building at the time to be evacuated and guided to a safe area. The fire department was notified who responded immediately to the call. The ambulance department was also notified in case of persons suffering injuries. The traffic in the immediate area and surrounding of the Police Head Quarters was diverted allowing the emergency services to carry out their duties. These actions attracted a lot of attention from the general public as they watched what was going on.

This entire event was in reality evacuation training, one of several to be held by the police department. It was a fire drill. These trainings are being kept to better prepare the entire staff at the police department on how to react if such an event or other life threatening event which requires the evacuation of the building should take place. These sessions will also be held as part of the in house training for the police supervisor who is charge at the time of the incident (OVD-P/ Officier Van Dienst Politie).

The training which lasted until 11.10 a.m. was a total success and the police department wants to thank community for their cooperation during the drill.