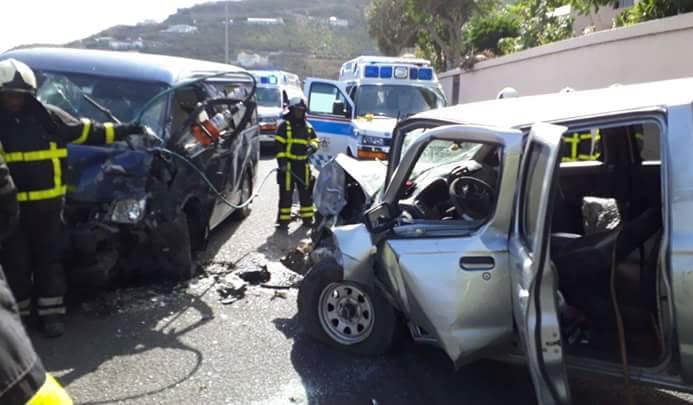 BELAIR, Sint Maarten — The Police Traffic Department is presently investigating a head-on collision between two vehicles which occurred on Friday June 1st at approximately 03.00 p.m. on Link One in the vicinity of Belair Hotel. The vehicles involved in the accident were a Nissan pick-up truck with license plate V-1068 and a blue bus with license plate Bus-142. As a result of the collision the driver of the bus remained trap in the vehicle and had to be removed by personnel of the Fire Department.

These passengers were all tourists on board of the “Freedom of the Seas” in port on the same day. On the arrival of the Police traffic department the passengers had already left the scene. Eye witnesses stated that these passengers had no visible wounds. Both drivers were treated on the scene by paramedics. The driver of the bus was released after treatment but, the driver of the pick suffered from a possible broken wrist and complained about pain in his hip.

Additional police patrols were directed to the scene to assist in the regulating of the traffic which had backed up significantly and was quickly resolved.