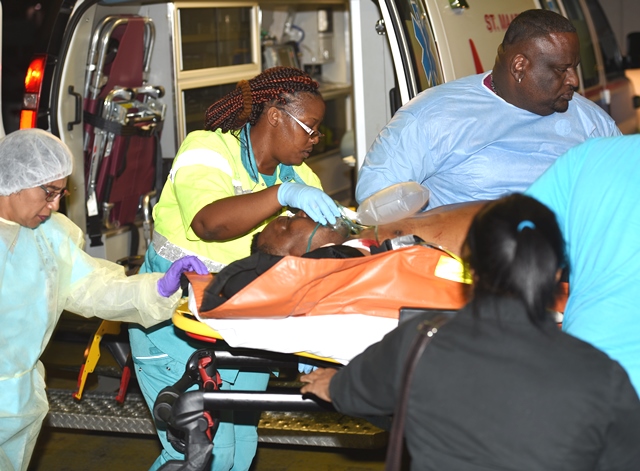 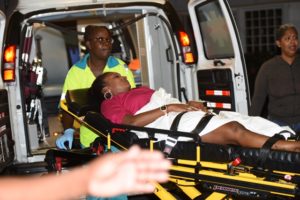 PHILIPSBURG, Sint Maarten — On Wednesday June 6th at approximately 12.15 a.m. police patrols, detectives and paramedics were sent to Jump-Up casino located on the Emmaplein to investigate an attempted armed robbery where shots had been fired and persons being injured.

On the scene the investigating officers learnt that four armed men dressed in black clothing had stormed into the casino threatening everyone including the employees to handover the money. While attempting to rob the establishment shots were fired by the robbers.

An off duty police officer who at the time of the incident was inside the casino returned fire hitting one of the robbers. The other robbers noticing what had happened fled the scene leaving the injured robber behind. 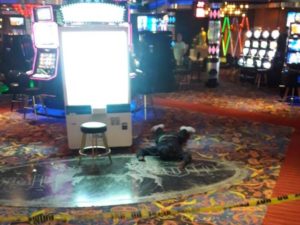 As a result in the exchange of gunfire two employees of the casino had also been shot. Both employees were treated on the scene by paramedics and then transported to the Sint Maarten medical Center for further treatment.

The robber that was injured was also treated on the scene by paramedics however he did not survive and was pronounced dead on the scene. The identity of this robber has not yet been established.

The area was immediately cordoned-off police. Detectives were on the scene interviewing numerous witnesses to the incident while the Forensic investigators collected evidence. More details to this investigating are not available at this time. As more details become available the media will be informed.

During  the robbery two of the robbers let different shots in the casino a worker identify by co-worker as Yan Blacks from Dominican Republic got a shot in his upper body and a woman got shot in her leg.

One of the robbers went in the back of the casino and encountered an off duty police officers, who shot him the robber try to run outside the casino, but fell in front of the main entrance and died on the spot.

Both of the victims were transported to SMMC for further treatment.  A source told our newsroom that the male victim is in critical condition.

As soon we get more information we will update our readers.