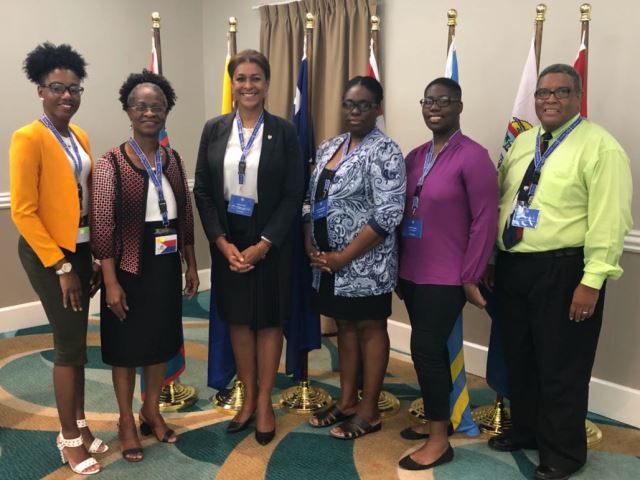 PHILIPSBURG / WILLEMSTAD — Minister of Social Development, Labour and Well-being hosted the Children Rights Kingdom Conference titled “Samen Kómen, Samen Bliíven, Samen Wérken” on May 14th, 15th and 16th on Curacao with the special theme of “Participation as a shared responsibility”. This reoccurring conference is organized by the Children’s Rights Kingdom Taskforce to which Sint Maarten is represented by Mrs. Shermina Powell-Richardson, Acting Secretary General of the Ministry of Education, Culture, Youth and Sport/Head of Youth Affairs.

Erik Arneman, the appointed “Opvoed Ambassadeur” for Children Rights on Sint Maarten highlights that, “we have to continue to be active parents and encourage teachers to listen to the students allowing them to express their feelings and involve them in problem solving. The conference encouraged us as caregivers to show more love and compassion to our youngsters. The Sint Maarten team committed to a renewed action plan with a revised Active Parenting Program, encouragement to other schools to implement these programs and the possibility to make it mandatory to all schools upon registration of students”.

Minister Wuite participated in the special session for Ministers and other official representatives of public entities with the objective to intensify (political) commitment of Kingdom countries. “As Minister I participated, encouraged and supported the development of a Memorandum of Understanding (MOU) with the aim to improve Children’s Rights within the Kingdom as the UNICEF reports of 2013 highlighted various sensitive conclusions and urgent recommendations that justified the institution of the Children Rights Taskforce in 2014. I congratulate colleague Minister Hensley Koeiman for the successful conference and thank Mrs. Shermina Powell-Richardson & the other members of the delegation for their active participation and collaboration.”

Saba Lieutenant Governor, Jonathan Johnson and the Government Commissioner of St. Eustatius, Marcolino (Mike) Franco (on behalf of him, Carol Jack) with the aim to conclude the MOU in 2 months.

Members of the Kingdom Taskforce as well as the various “Opvoed Ambassadeurs“ met with the organization team for a debriefing session the day after to give a quick reflection regarding the 3 day conference.

There was an overall consensus that the Taskforce had accomplished a major milestone with the Ministers charged with children rights having signed a document of intent outlining key areas of shared responsibilities.

Mrs. Shermina Powell-Richardson said that it was agreed that each country would further develop their action plans presented at the Conference and that these plans should clearly outline the budget of the individual country but also more specific the cost related to common activities under the umbrella of the Taskforce.

“Regarding the way forward it was decided that further discussions where necessary before concluding which country would take up the chairmanship and secretariat for the coming year as well as which country would host the next conference” Mrs. Powell concluded.

The next video conference of the Kingdom Taskforce Children Rights is scheduled for May 31st, 2018