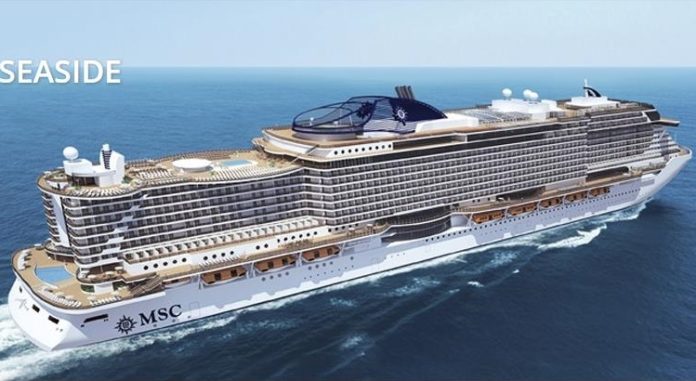 PORT ST. MAARTEN – MSC Cruises next generation cruise ship Seaside will be making its inaugural call on Wednesday, April 4th to destination St. Maarten. MSC Seaside, which is part of the new Seaside Class described by MSC as a game changer, features a promenade with shops, restaurants and bars and much more.

The vessel is a completely new prototype pushing the boundaries of innovative ship building and design.

MSC Seaside was scheduled to visit the island in December 2017, but Hurricane Irma in September 2017 changed the cruise line itinerary plans for the North eastern Caribbean area.

Port St. Maarten Management is very pleased to welcome MSC Seaside to the destination, the second newly-built next-generation mega cruise ship in the MSC Cruises’ fleet. This further demonstrates the confidence in the island and at the same time it further validates the recovery of the country’s cruise sector, Port Management said on Tuesday.

MSC Seaside is leading the way for a new generation of cruise ships with their revolutionary architecture and cutting-edge technology followed by the 1stand 2nd generation ships.  MSC Seaside was the first ship in the MSC Cruises’ fleet to be christened in the United States.  The vessel is sailing in the Caribbean year-round from Port Miami.

MSC Seaside has a gross tonnage of 153,516 tons; has a passenger capacity of 5,119 and 1,413 crew; the ship was launched in November 2017 and christened in December 2017.  MSC Seaview, Seaside’s sister ship will come into service in June 2018 starting her summer season in the Mediterranean.

MSC Cruises is making considerable investments in constructing Future Larger Vessels (FLV).  The two-next generation ships are the largest ships ever to be built for a European cruise line and the second largest globally.

MSC Cruises is a Swiss-based world’s largest privately-owned cruise line.  The cruise line today has a fleet of 14 ships since its inception in 2003.  In 2014 MSC launched an investment plan to support the second phase of growth and in April 2016, the cruise line ordered additional vessels for a total investment of over 10 billion Euros for up to 11-new next-generation ships that started to come into service starting in 2017 to 2026.

MSC Cruises is expecting the delivery of at least one new ship each year through 2026, with six to have come into service between the period 2017 and 2020.