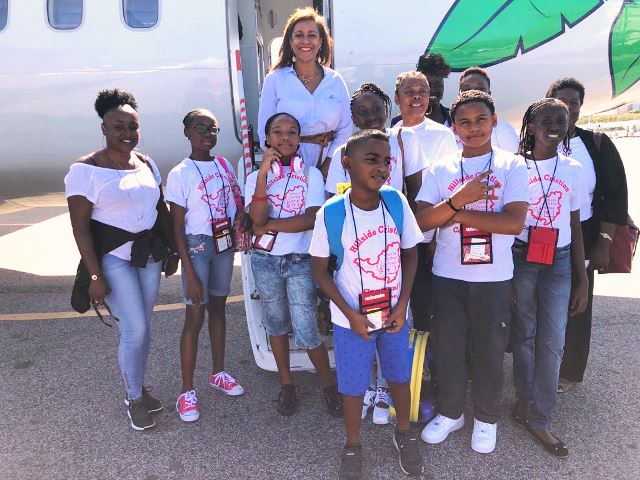 PHILIPSBURG, Sint Maarten — Minister of Education, Culture, Youth and Sport Jorien Wuite traveled to Curacao on Friday, April 13th and returned on Monday, 16th.  The primary purpose of the visit was to support students of the Hillside Christian School who, after winning the local competition of UNICEF’s Children’s Rights Film Festival, were invited to participate in the regional finals amongst the Dutch Caribbean.  The Minister acknowledges that UNICEF has been instrumental in the recovery process of St. Maarten; contributing in a number of programs to protect and encourage the healing and well-being of St. Maarten children in the aftermath of hurricane Irma.

The children, along with their chaperones and UNICEF coordinators, were able to meet and interact with students from all six Dutch Caribbean islands.  They participated in workshops, explored and were able to expand their horizon. The children were very well behaved and very gracious when it was revealed that they were not victorious.  Ultimately the top prize was given to Bonaire however the Minister expressed that she was extremely proud of the students.  As part of the panelist of judges, the Minister was very impressed with the quality of the films presented by all the islands.

While in the Curacao, the Minister also took the opportunity to pay a courtesy visit to the Minister of Education, Science, Culture and Sports Marilyn Alcala-Walle.  Minister Wuite left that meeting both enthused and encouraged as both Ministers recognized the similarities of their portfolios and were able to immediately connect.  The education agendas clearly confirmed a mutual interest and priority for the position of public education, renewed legislation for higher education and the associated challenges of the so called “boy problem” and early dropout of at-risk youth.

The Ministers discussed the status of St. Maarten exam students that stayed on Curacao to complete their final year of secondary education after the hurricane.  She pledged the Ministry’s support and coordination to ensure that the needs of the students are continuously monitored.  In the area of Sports they dialogue on anti-doping policies and structures that support the observance of the International Convention against Doping in Sport which would enable athletes’ participation in regional and international competitions.  Applying technology to encourage capacity building between the respective ministries is another proposal that both Ministers also saw as a valuable opportunity.

At the conclusion the meeting Minister Wuite graciously accepted the invitation of Minister Alcala-Walle to join her at Bandabou’s Harvest Parade which according to Minister Wuite “was a delightful highlight of our shared time together. As Ministers of Culture it clearly underscored our joint responsibility and love for cultural heritage!  I definitely look forward to further collaboration with the Minister and Ministry in Curacao as I believe we have much to learn and teach each other.”

Minister Wuite is thankful to the Minister Alcala-Walle and the community of Curacao for their friendliness during the visit and she looks forward to a continued partnership between the Ministries.