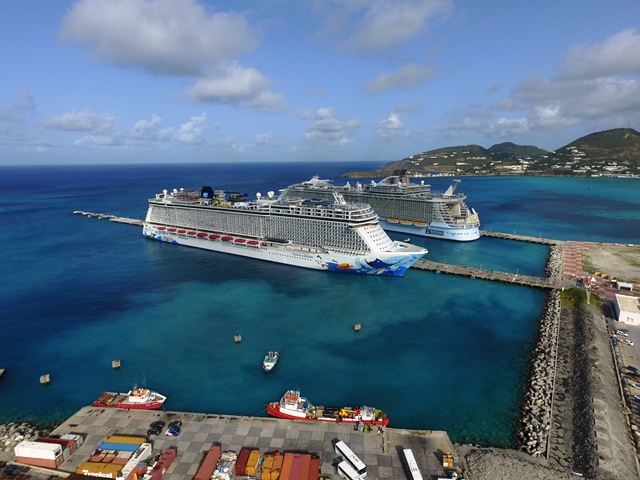 POND ISLAND – Minister of Justice and Acting Minister of Tourism, Economic Affairs, Transport and Telecommunications (Ministry TEATT) Cornelius de Weever after doing a walk through in Philipsburg on Saturday, said cruise line executives at the recently concluded Seatrade Cruise Global Conference, pointed out that safety and security of cruise passengers are essential for the cruise passenger experience while visiting a destination.

Minister De Weever took the initiative and invited his colleagues and stakeholders for the Saturday walk through.  The representatives spoke with various business owners, taxi drivers and small business beach operators.

A number of issues were identified, such as barkers, the uneven bricks along the main street which makes walking a challenge at times, dead palm trees etc.

“The safety and security of our visiting guest is priority number one, and cannot be taken for granted. In one presentation a cruise line executive said, ‘…their ships have rudders and propellers which means we can go anywhere.’

“This statement stuck with me and motivated me to do much more to ensure that St. Maarten stays the number one port and destination in the North eastern Caribbean,” Minister of Justice/TEATT Cornelius de Weever said on Sunday.

Based on the points identified during the walk through, an action list has been drafted starting with Ministry VROMI who will follow up with their staff and make arrangements for a general clean-up of Philipsburg and probably extend this into the districts.

The Minister of Justice/TEATT said it was very important for the St. Maarten community, adding that it was there responsibility to keep their surroundings and the country clean, and this also relates to every district within the country.

De Weever added that more garbage bins are needed since the passing of Irma and will have to be sourced which would contribute to keeping St. Maarten clean.

The Minister of Justice/TEATT said the position of city inspector and a city manager was also discussed as new avenues worth exploring going forward in order to deal with the challenges that regularly present themselves which need to be dealt with in a structural manner once and for all.