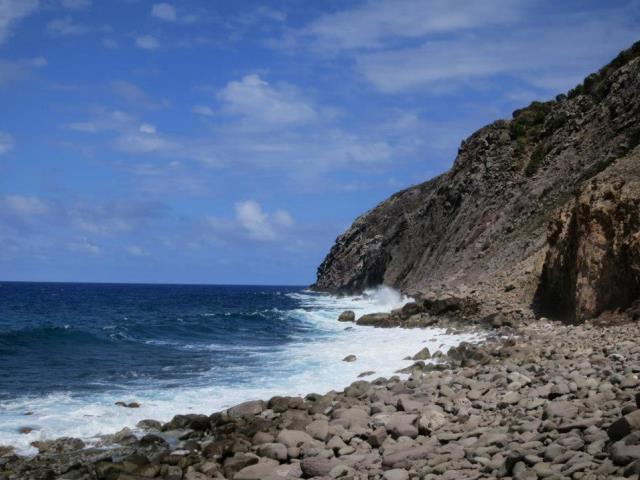 ORANJESTAD, Sint Eustatius ( KPCN) — On Saturday March 3rd, 2018 two men who are accustomed of picking “wilks” (schelpdiertjes) from the rocks along the sea shore walked to the Venus Bay area around 04.30AM hours. Venus Bay is an isolated area on the north side of the island. It is also not easily accessible.

Around 09.00AM one of the man showed up at a local bar in the Zeelandia with some cuts and bruises and report that the other man had slipped from the rocks while picking wilks and was subsequently swept into the sea by the big rough waves.

The police was notified and that led to a coordinated multidiscipline search and rescue operation, which involved amongst others the Police department, KMar, the fire department, hospital personnel, the Coast Guard, the harbor official, the marine/diver department from the Nustar, a local fisherman’s boot, the Medivac helicopter, and some other volunteers from the local dive shop and other citizens.

The first search team arrived in the Venus Bay area around 10.15AM hours by the use of some quads that the authorities had used from some locals who volunteered the use of their vehicle for the search and rescue operation. The first search and rescue team onboard of a local fishing vessel, including, police, private citizens, and a diver from one of the local dive shops, arrived at the location by sea around 10.40 hours.

In the meantime the members of the search team on shore took position from an elevated position along the shore line and they spotted an unidentified object floating under water in the sea. They directed the rescue team who was onboard the fishing vessel at the time to the location. The water in the cove area at Venus Bay was too rough and dangerous for the fishing boot to investigate the object.

The captain of the fishing vessel got as close as he could without endangering the lives on board and the diver dove into the water and retrieved the lifeless body. Then the body was brought to the Charles A. Woodley Pier in Gallow Bay where the doctor on duty officially pronounce the person death.

A preliminary medical review of the body by the doctor together with police determined that there were no indication of foul play visible on the body. Police also surveyed the area, including the area where the witness, indicated that the victim fell into the sea.

There was also no indication of foul play. The incident was thus deemed an accident that led to the death of the man Anthony Recardo Bunitin born July 27 1960 on Curacao. After consulting with the prosecutor the body was released to the family.