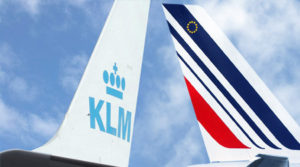 HOLLAND / FRANCE — Strikes are on the books for sister airlines KLM and Air France in the course of next week.  Part of KLM’s cabin crew will strike on Monday 8 January while Air France pilots plan to strike over a security measure, the Financieele Dagblad said on Friday.

KLM cabin crew members are protesting cost reductions made last year which led to one cabin staff member less on 40% of intercontinental flights. The union involved, FNV Cabine, said work pressure had increased irresponsibly. The largest cabin staff union VNC is not taking part in the strike. Air France pilots are planning to strike next Thursday over a security measure.

The French airline replaced a pilot on a flight on 2 January because he refused to depart without a purser who was sick. The pilot said this violated security regulations.

French paper Les Echos quoted one of the leaders of the strike as saying: ‘We will not tolerate people who force us to contravene security regulations for the sake of profitability.’ The AF strike is seen as a test of the preparedness of KLM pilots for a strike, the FD said.

The Dutch pilots are concerned about Air France plans to change its pension plan and adapt regulations for part-time work. Elsewhere, pilots at KLM’s budget subsidiary Transavia have been without a collective labour (CAO) agreement for more than a year.

Transavia is aware strike action is pending, but says it expects a solution to the problem will be found following talks with pilots union VNV, the FD reported.