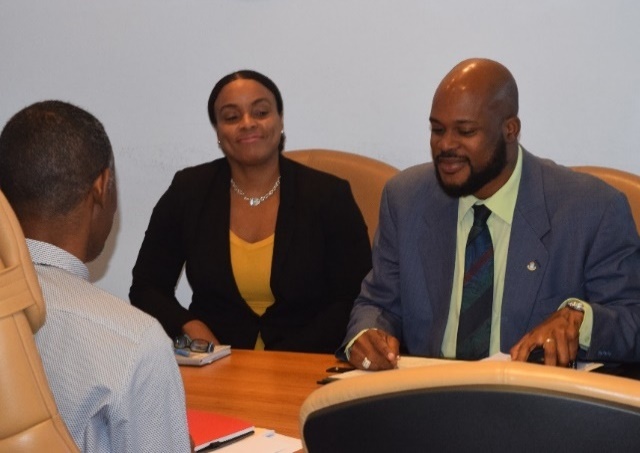 The Managing Board presented Minister Giterson with the financial challenges the company now faces due to the loss of revenue directly related to the damage Hurricane Irma has caused to the economy of the island. CEO, Mr. Kenrick Chittick explained that the large consumers which generate the largest revenue for the company have been damaged beyond a quick repair while the expenses related to the restoration of the damage to the company’s electricity and water infrastructure are excessive.

During the presentation, Mr. Chittick also outlined the pending matters that have to be finalized by the company. Mr. Chittick stated that a follow up meeting will be organized with the Minister and his cabinet. The Managing Board also did not lose the opportunity to inform the Minister of the selfless manner in which the employees of NV GEBE carried out their duties to assist in the restoration of electricity and water to the community directly after the hurricane ravaged circumstances, despite having suffered personal losses themselves.

Mr. Chittick informs the media that although the busy schedule of Minister Giterson, presently, does not allow for a tour of the utility company’s facilities, the Managing Board looks forward to escorting the Minister and his cabinet members, on a tour of the Production Plant, Philipsburg Substation, and the Water Quality Control Department and having more in depth discussions regarding the processes and functioning of the company.