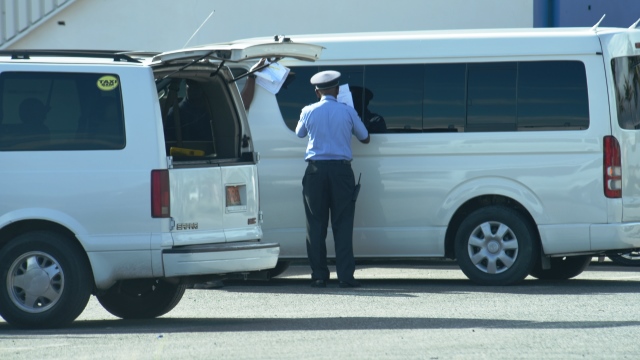 “My staff as well have personally suffered losses and the road to recovery is long but assured. Having said that, I would like to quote and agree wholeheartedly with the Minister of TEATT’s previous statement on a separate subject but one that I believe is also applicable in this case “that the only irresponsible action is inaction”.

“Safety is paramount when it concerns mass transportation of persons on the public road. Interestingly enough is the fact that the United Bus Driver’s Association showcased the Inspectorate’s press release of Monday, October 23rd in The Daily Herald front page of today, October 25th where a public bus is displayed driving on the public road without a windshield, structural damage to the cabin and no license plate.

“This was presented as the visual centerpiece of the Association’s article. However, in doing so, it goes to further strengthen the department’s point that there needs to be an increased awareness and culture of safety in the transportation sector. A focus on safety above all. The Inspectorate does not exclude itself from this requirement in anyway.

“Additionally, to bring clarity to the statements made by the Association in the article, I can confirm that no discussions were held with the Head of Control Unit who was not present during inspections on Tuesday. The President of the Association, Mr. Claude Omeus, did contact my person yesterday [Tuesday] morning to express his concerns which centered on objecting to paying a fee to be inspected and the validity period of motor vehicle inspection cards.

“I reiterated several times that one cannot place a price on safety and the department couldn’t simply take a driver’s word that his or her vehicle didn’t sustain any damage as a result of passing hurricanes.  In carrying out controls and inspections one cannot blindly trust but must verify compliance. The verification comes at a cost which is stipulated by law. Further to that, the relief that the association is requesting also comes at a cost to the motor vehicle inspection center which is a private institution and not government.

“However, after discussion with the motor vehicle inspection center it has been agreed that public transportation motor vehicles with an inspection date in the year 2017 will pay a re-inspection fee of USD11 per vehicle. Vehicles with an inspection date in 2016 will pay the full fee for inspection of USD 21 per vehicle as they are required to be inspected annually anyway. This preliminary decision was also communicated to the President of the United Bus Drivers Association, Tuesday morning, before the release of the association’s article.