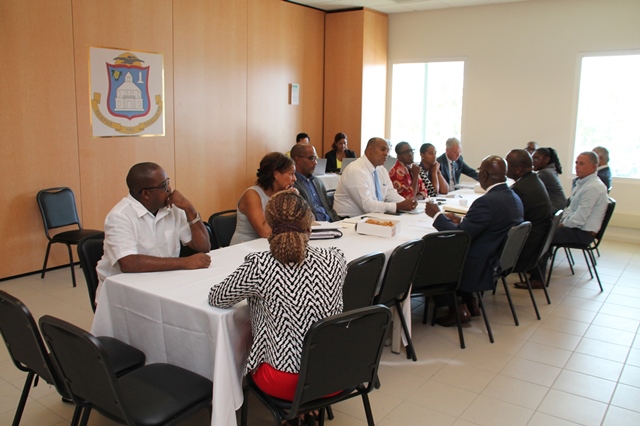 PHILIPSBURG –  The position of the Dutch Government not to grant aid for the recovery of Sint Maarten following the devastation caused by hurricane Irma if the Government of Sint Maarten doesn’t accept the two conditions, was the topic of a briefing conducted by Prime Minister, Mr. William Marlin, and Minister of Justice, Mr. Rafael Boasman, when they met on Monday morning October 23 with the Secretaries General of the various ministries and representatives of the cabinets of the ministers.

Both ministers wanted to ensure that the position taken by the Government of Sint Maarten is understood by the top civil servants in the organization, in particular because of the sentiment of some people “to just give in and get the money”.

Prime Minister concluded the briefing by stating that “he would never, ever block aid from coming to Sint Maarten and that agreeing to something just for money will not give Sint Maarten, a young country of seven years what she deserves. Sint Maarten needs recovery funds yes, but Sint Maarten also needs a fair chance to develop its own Integrity Chamber and needs all the support of the Royal Netherlands Marechaussee  as already established in the protocol that is valid up until December 31, 2019.”

What we do not need is a takeover by the Dutch government.

The Prime Minister said that his government is willing and ready to sit a negotiate with the Dutch government about the amount of aid and the conditions.