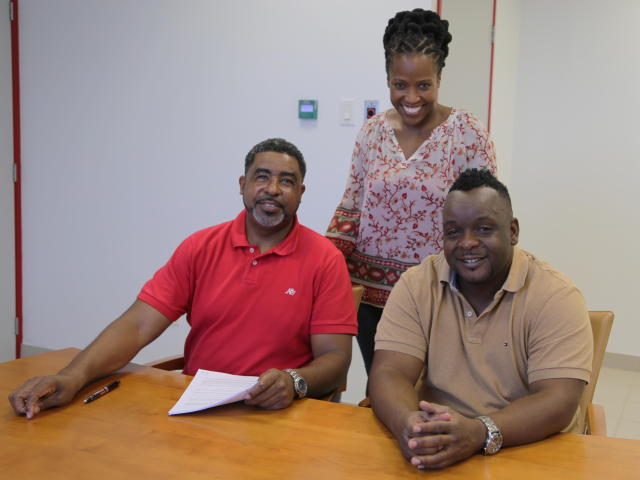 Pond  Island –  TelEm Group Chief Executive Officer (CEO), Mr. Kendall Dupersoy, has fulfilled one of his early promises since taking up the top position in the company – to bring TelEm Group’s Helpdesk services back to St. Maarten.

In the CEO’s view, the wrong message was being given to customers, who found themselves speaking to a helpdesk based in Curacao, rather than here on the island. He was also strongly against providing employment in other places rather than on St. Maarten.

“It was something I never really agreed with while I was a Board member at TelEm, and it is one of the first things I set about changing days after I joined the company,” says Mr. Dupersoy.

He made the comments during a brief signing ceremony with locally-based company Telecare B.V., operated by CEO, Mr. Oswaine Illis. Also present at the time was TelEm Group Manager, Customer Care, Veronica Browne, who was instrumental in selecting Telecare following an intensive bidding process.

“We carried out a thorough bidding process to find the best company to provide local Helpdesk services and I look forward to Mr. Illis and Telecare taking this opportunity to show what a local company can do given the chance,” said Mr. Dupersoy.

“I strongly believe we should not have our Helpdesk located off-island. That itself was a big motivation to me, not only because of the level of service we were getting at the time, but also because I want to increase our customer service for TelEm customers – a very important part of any improved customer experience,” explained Mr. Dupersoy.

According to the CEO, the locally-based company will have the right people in the right place with a more complete service to TelEm Group customers.

He informed that from its local base, Telecare will integrate into TelEm Group’s various networks so that staff can provide quicker technical response to customers both on the phone and also in the field since there will be less lag time from when a customer makes a call to when a technician goes out, if necessary, to deal with a particular problem.

Telecare CEO, Mr. Illis assured that he has a young team that will be working in shifts and who are eager to show what they can do.

During the signing ceremony he thanked Mr. Dupersoy for the opportunity and vowed to provide the best partnership arrangement to satisfy TelEm Group customers.

“We hope to exceed all of TelEm’s expectations and what the company wants to achieve with customer care on this island and we will be doing that with a young and very eager team,” said Mr. Ellis.

TelEm Group Manager, Customer Care, Ms. Veronica Browne said the new Helpdesk service will officially kick off on August 15th after some in-house customer relations training that will be carried out by experienced TelEm Group staffers themselves.

“The Helpdesk will be open from 7:00 in the morning until 9:00 pm at night, 365 days a year. We are very fortunate that we have the combined experience of Managing Director of Telecare, Ninoska Lambert, who is in the hospitality industry and that of Mr. Illis who has vast IT experience coming together with 11 young local workers to provide this very important service for our customers,” said Ms. Browne.

She noted that Telecare has already taken it upon itself to train its staff very early on about the importance of good telephone etiquette and customer relations practices before starting another training programme with TelEm Group personnel.

“We see that as a very good sign. They are very dedicated, committed and I look forward to working with the Telecare team,” continued, Ms. Browne.