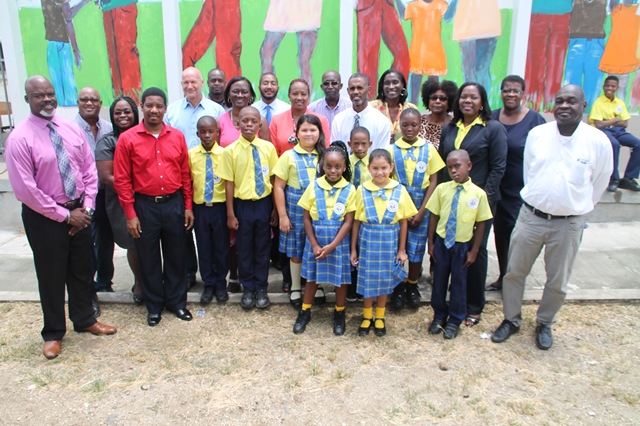 In November 2016, the school was closed and the students were dispersed to various other public schools and the community centers. Inspections were carried out based on the air quality in the Cay Bay/Cole bay area, and it was ascertained that the best short term solution was the installation of air conditioners in the classroom to minimize the negative effects of the air. In order to complete the installation, the school required an electric upgrade to carry the load of the classrooms. the Ministries ECYS, VSA and VROMI, were vital parts of the inspections and upgrades at the school.

The repairs were part of the critical upgrade project required for the various public schools, however, due to the urgent situation at the Leonald Conner school, the repairs were done ahead of the time. Fortunately, NV GEBE, as a Good Cooperate Citizen, opted to pay for the complete upgrade and installation in the amount of Naf. 313,013.50. The critical upgrades will take place for all public schools including the electrical, cabling and plumbing. “We would hope that in the future, more Good Corporate Citizens would show their willingness to give back to our community,” Minister Jacobs said. The Minister thanked NV GEBE for their Corporate sponsorship extended to the Leonald Conner School, and to any other initiative they will continue to support in the near future.

Head of New Projects, Mr. Kurt Ruan thanked CECC, HEMCO NV, The Division Public Education, NV GEBE and the board of directors, Ministry VROMI, and the school manager Mrs. Samuel for their support and contribution to the emergency project. “ I am very thankful for NV GEBE for making this project possible, as well as continued ventures with NV GEBE and Division Public Education.”

“We are doing all that we can to help our schools. We need more employees in St. Maarten to have a higher education. To obtain higher degrees, it has to start with primary school. We [NV GEBE] need to invest in education in order to have better employees in our workplaces,” Mr. Kenrick Chittick, CEO NV GEBE said during the ceremony. Mr. Chittick thanked the Minister for being persistent in getting the objective achieved and thanked the school management for having the patience to see the project through to completion.

“We have come a long way in our educational system, but we still have a long way to go. The Leonald Conner School is a more recently built school, but in 2017, there is still a need for maintenance and upgrades. Teachers, management, students, and staff of the schools are the ones who are able to identify the needs of the school. You are the ones who will feel the difference of the new installations, but we must also work on the other public schools. It is my goal, together with Government and all other Corporate Citizens, who would like to make a contribution to find ways to fund the other electrical, cabling and plumbing upgrades to be done. Unfortunately, it’s not on the Capital Budget for 2017, however, seeing we were able to get help from the business community, I will start looking in other areas to safeguard funding to get the other public schools to the next level. Take good care of your school, as it is the responsibility of every child, and every person who uses the school. Have a successful school year 2017-2018.,” the Minister added.