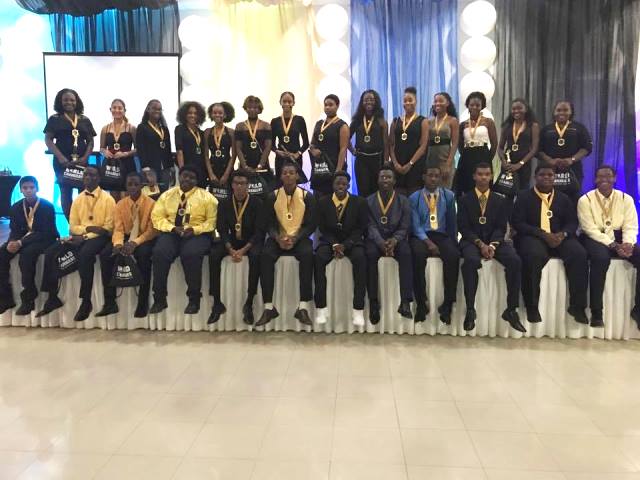 CAY HILL – It was a royal affair at the 2017 G.I.F.T.E.D. Royalty Awards held at Belair Community Center on Wednesday evening, July 5.

The Royalty Awards is presented by G.I.F.T.E.D. Foundation and is the leading award ceremony honouring youth excellence on St. Maarten. This year, 50 nominees, from 7 high schools were celebrated in grand style. Attendees were decked out in black and gold and the program included an address by Minister of Education, Culture, Youth and Sport Silveria Jacobs, with guest performances by Malaika Maxwell and Shawn J.

It was a night to remember for all, in particular for Ifelola Badejo, who was awarded with the 2017 G.I.F.T.E.D. World-CHANGER Award for her outstanding and selfless work in the community.

Earlier that day, President of G.I.F.T.E.D. Lenworth Wilson, Jr. and other board members visited Kyron Mussen, a Community Service nominee of Sundial at the St. Maarten Medical Center. There, Mussen received his certificate, royal medallion and gifts, surrounded by family and friends.

G.I.F.T.E.D. Foundation thanked all participating schools, its partners, special invited guests, presenters, nominees, awardees and volunteers for their continuous support in honouring the youth who are excelling in “our community and motivating them to be positive world changers.”