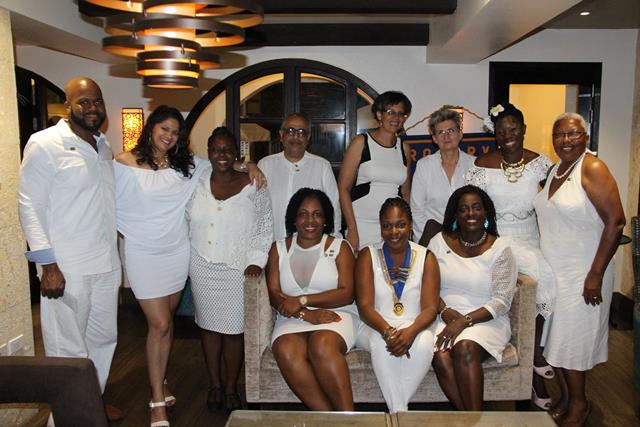 PHILIPSBURG – On Saturday July 8th 2017, The Rotary Club of St Martin Sunrise celebrated the installation of their new Board with a gala dinner held at the Infinity Restaurant, Oyster Bay.

Outgoing President Okama Ekpe Brook gave a detailed presentation of her year as President, outlining the numerous accomplishments and projects that were executed. In her speech Mrs. Ekpe Brook mentioned that effective leadership is to know that you have touched the life of uprising leaders.
The legacy of our “Small but Mighty” club will continue with outstanding service projects not only on St. Maarten but also internationally. She thanked everyone for the opportunity to have served as their President and ask that they join her in welcoming the 2017-2018 President Damali Bryson and her Board of Directors and Chairmen.

President Damali Bryson is a Medical Professional at the St Maarten Medical Center, according to Bryson, the 2017-2018 Rotary International theme is “Making a Difference” and even though the Rotary Club of St. Martin Sunrise might appear small our membership is totally committed to making a great impact in our community.  She is appealing to persons in the community who would like to make a difference, to become a member of the club or be a “friend of Rotary”.

Rotary is a network of 1.2 million people in more than 200 countries and working toward the same goal, promises to make a significant difference in the lives of others. One of Rotary signature project is the eradication of polio from the face of the earth. Since 1985 the Polio Plus campaign has saved more than 2 Billion children from becoming victims of the disease.

The Rotary Club of St. Martin Sunrise meets every Tuesday at The Gingerbread Café located in the Belair Beach Hotel from 7:00 – 8:00 AM. Persons interested in more information may contact valda.rotary7020@gmail.com.