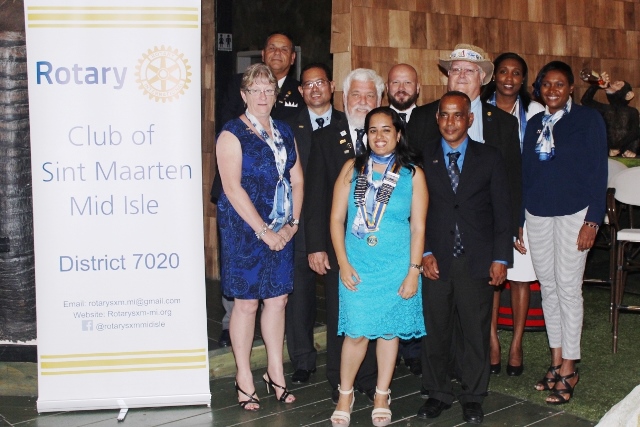 PHILIPSBURG, Sint Maarten — As the end of ‘The Rotary Year 2016-2017’ came to an end Mid Isle held their Change of Board celebration at ‘The Zoo Rock Café’.

President Veronica Jansen-Webster had several personal and career challenges to face this year and thanked her outgoing board and fellow members of Mid Isle for their unimaginable and overwhelming support for helping her to pull off a successful year.

President Veronica reflected on some of the club’s achievementS for the year. Her main focus project for the year was ‘The Welcome Baby Bag Pilot Project’ for which a district grant was secured. Our signature project the Annual Spelling Bee this year had a record number of schools participating. The proceeds from our ’Heineken Regatta Parking Fundraiser’ went to help the Parkinson’s, Diabetes and Alzheimer Foundation. Mid Isle assisted Ki-Mani Olivacee, a high school student to collect and prepare school bags with school supplies for needy students. We organized for the children of four foster homes to attend a movie in December, during their holidays, and made donations to the homes. The Alex n’Ani fundraiser for ‘End Polio now’ and the Ramesh Manek Walkathon to ‘End Polio Now’ were both great successes.

President Veronica thanked her board with a token of appreciation and gave special thanks to Rotarian Wayne Wilkie for helping her along the way throughout the year. The Rotarians of the year awards went to Rotarians Anjali Manek and Denise Antrobus for their outstanding contribution of the club in 2016-2017.

The presidential collar and charter were turned over to incoming President Anjali Manek. 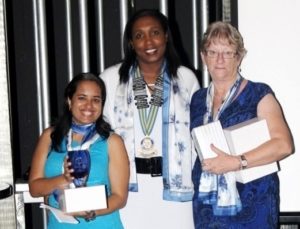 President Anjali is excited for the upcoming year to continue the great work that Mid Isle has been doing in the community and internationally. She thanked Past President Veronica, her board and the Rotarians of Mid Isle for another successful year.

President Anjali has two areas she would like to focus on during the year 2017-2018. The first being the youth saying in the Words of Rita Pierson, a US based educator of 40 years: ‘Every child deserves a champion – an adult who will never give up on them, who understands the power of connection and insists that they become the best that they can possibly be.’

Her Second focus is will be raising awareness and funds for ‘The End Polio Now” campaign. This is close to her heart because of her father Ramesh Manek. He was very passionate about this cause. She remembers that he always used to say ‘Every little bit counts’. Anjali finished by saying ‘As I see it now, when we all work together for a cause great things can happen.