PHILIPSBURG, Sint Maarten — The Atlantic hurricane season runs from June 1 to November 30, with the peak occurring between mid-August and late October, which means that we should not become complacent and keep our guards up. The Ministry of  Public Housing, Spatial Planning, Environment and Infrastructure ensures that prior to the hurricane season the island is ready and after the storm makes sure that cleaning-up starts immediately. 721 News spoke with Claudius Buncamper, Department Head Infrastructure Management on their preparations. 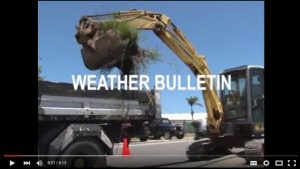 “We usually send out a notice  to all contractors that will be involved in the hurricane clean-up asking them to send in the necessary paper work to ensure that they are able to operate on the roadways before and after a storm,” said Buncamper.

The documents Buncamper are referring to are insurances against liability, contractors certificate and registration documents from the various entities (tax office/Chamber of Commerce etc.). Government also inspects the equipment that will be working on the roadways and also where the equipment is insured, as government wants to use as less equipment from the French side as possible and does not want to get caught up in any legal battles, so all paperwork and insurances must be valid.

Another important concern besides the equipment to clean the roads and trenches that Public Works is extremely concerned about are the pumps. Buncamper mentioned that all pumps must be functioning to avoid flooding, and the pump stations are manned during the storm.

The annual district clean-up has been going well as notices were placed in the daily newspapers and the clean-up has also been done in conjunction with the Community Police Officers. “We are asking the community to dispose garbage accordingly as we want to prevent garbage from people’s yards going into the trenches clogging the waterways, although government goes out a day before the storm to collect garbage,” said Buncamper. “All in all, the contractors have been on the ball.”

After the storm has passed, Public Works is the first entity on the roads, making sure the crucial roadways are cleared for emergency vehicles, such as the Ambulance to pass safely. Drones are now being used to give a general picture of the island. “We check for erosion of beaches, damage to monuments, and the government building, a rapid assessment of all infrastructure is taken,” said Buncamper.

Once a general assessment has been made then the Public Works knows what areas to go into to start to clean-up, so that others, such as the utilities companies can also come out to make their assessment. “It is important to note that the contractors never go out on their own to clean-up they go in a team along with Public Works,” said Buncamper.