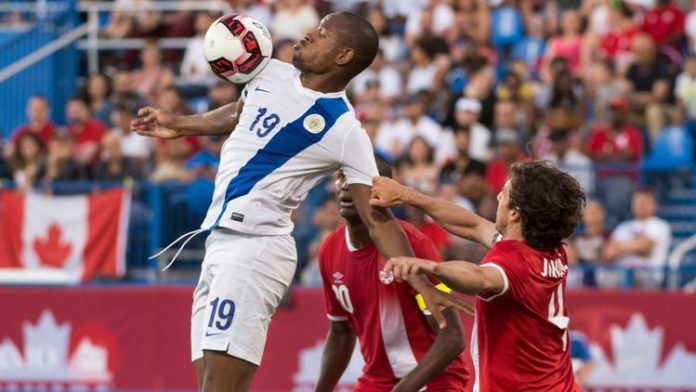 The rhythmic beats of Caribbean music echoed through USD’s Torero Stadium on Friday morning as the soccer players from Curacao, an island of 150,000 off the coast of Venezuela, prepared for practice. They laughed, they joked, they danced. Don’t be fooled.

They are in the CONCACAF Gold Cup for the first time, opening the 12-team tournament Sunday at 4 p.m. at Qualcomm Stadium against 2015 runner-up Jamaica. They are not tourists.

“We can party, we can have a good time, we can joke together, we make fun of each other,” midfielder Leandro Bacuna said, “but when we have to play we will play. That’s the most important thing.” And they can play.

If you watched practice, seeing the big, athletic bodies, seeing the bright orange practice jerseys, seeing the sublime technical skills, seeing the flowing style of soccer, you’d swear you were watching a Dutch national team. And in a sense, you were. Practically the entire roster grew up in the Netherlands, schooled in the vaunted Dutch youth system steeped on the principles of “Total Football.”

Curacao assumed the Netherlands Antilles’ membership in FIFA, much like Serbia did after Yugoslavia broke apart. On the surface, it seems like an overly ambitious move, trying to compete in the big, bad world of international soccer with a population of 150,000, or roughly that of Escondido.

But the soccer federation knew what most others didn’t: The island bubbling with athletic talent (Major League Baseball has a half-dozen players from Curacao), and there is even more living in the Netherlands with parents from the island who left to find work after Royal Dutch Shell sold the Isla Refinery, once the world’s largest, in the mid-1980s.

The turning point came in 2015 when former Dutch star Patrick Kluivert, who had a mother and grandfather from Curacao, agreed to become head coach. He used his pedigree and contacts – he played for Barcelona and is the Dutch national team’s third all-time scorer with 40 goals – to convince players with Curacao roots to represent the island.

The result is arguably the most accomplished roster in a 2017 Gold Cup where the United States and Mexico both sent B teams. Leandro Bacuna (Aston Villa), Cuco Martina (Southampton) and Kemy Agustien (Swansea City) have experience in the English Premier League. The starting goalkeeper and most of the defense plays in Dutch pro leagues. There are midfielders from top teams in Japan, Portugal and Germany, forwards from teams in Denmark, Slovakia and the Czech Republic.

Gino van Kassel, once a top youth prospect at Ajax of Amsterdam, went to Slavia Prague last year for a club record transfer fee. He scored seven goals in eight 2016 appearances for Curacao.

“I was always dreaming of playing for the national team of the Netherlands, of course, because I was born there,” said van Kassel, whose mother is from Curacao. “They never called me up. One season, I was the top striker of the league. I scored 29 goals in 26 matches. They still didn’t call me up. From that moment, I thought maybe this is not for me. When I got a call from Curacao (in 2015), I said yes.”

“As you can see, we’ve got a great squad,” said Bacuna, who played 20 times for Dutch youth national teams but never for the senior team, allowing him to switch international allegiances. “We’re getting there. It took us a while. We’re trying to make our name now. You can see in the FIFA ranking that we’re climbing up.”

Curacao was 160th in the FIFA world rankings when Kluivert took over. Remko Bicentini, his assistant, took over last year when Kluivert returned to Europe (he’s now director of football for French power Paris Saint-Germain) and has it up to 68th, four spots ahead of Honduras, which played in the 2010 and 2014 World Cup.

The scary part is who they don’t have. Midfielder Leroy Fer, who scored for the Netherlands in the 2014 World Cup, admits he nearly chose to play for his parents’ homeland. Defender Vurnon Anita, who played in the English Premier League and also has caps with the Dutch national team, was born on the island. Bacuna’s 19-year-old brother Juninho is a rising star in the Dutch first division. There two others with top teams in the Netherlands, and two more in Germany.

The goal is audacious: become the smallest nation to compete in a World Cup.

The 2018 campaign ended in the third round with a two-leg loss to El Salvador after the federation was unable to assemble its full team. It had better luck securing players for the biennial Caribbean championship last month in Martinique and won it, beating Jamaica 2-1 in the final.

Most fans will come to Qualcomm Stadium on Sunday to see Mexico in the 6 p.m. game against El Salvador, but the other Group C game may provide the more intriguing 90 minutes given what happened two weeks ago in Martinique. Jamaica tied it in the 82ndminute; Elson Hooi, who was born in Curacao but now plays in Denmark, scored the winner two minutes later for the island with 2.6 million fewer people.

“All of us have a lot of pride,” Bacuna said. “It’s a big thing for all the people in our country. They’ve waited a long time for this.”