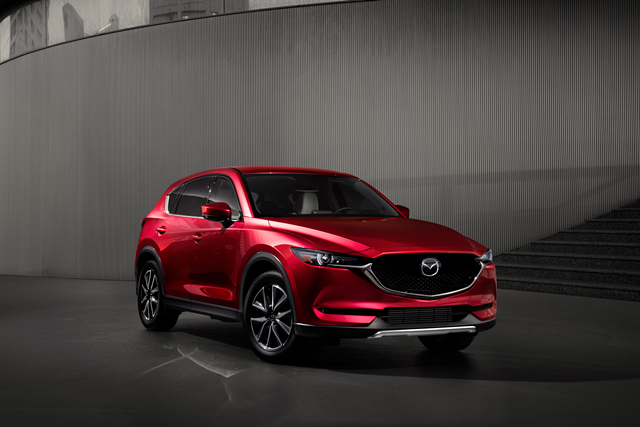 COLE BAY – The all-new 2018 Mazda CX-5 Crossover SUV, revealed late last year at the Los Angeles Motor Show in the U.S., is finally here in St. Maarten/Saint Martin, all the way from Hiroshima, Japan, thanks to the efforts of the management and owners of Caribbean Auto, located in Cole Bay.

The Mazda CX-5 has become an instant hot ticket item with its beautiful looks that’s loaded with tons of features. Mazda is known for its “Zoom Zoom” driving philosophy, creating vehicles that are fun to drive. The all new CX-5 not only embodies this driver-first mentality, but now has dramatically reduced road noise for an incredibly premium and quiet cabin.

Since its introduction in 2012, the CX-5 has become one of Mazda’s best-selling global models, and has been a vehicle for the brand’s “SkyActiv” engine technology. Mazda has confirmed that the engine options all new CX-5 Crossover have been tweaked for more performance and greater fuel efficiency.

It looks like a clear evolution of the car it replaces rather than a radical overhaul, but there are some important design changes. At the front, it gets slimmer headlights and a slightly larger grill, joined by re-profiled tail lights and a tweaked tail gate at the back.

The subtle alterations hide front and rear tracks widened by 10mm, and the A-pillars sit 35mm further back than on the existing model. It sits on a modified version of the existing platform, and while the wheelbase remains the same, it’s a longer car by 10mm and sits 15mm lower.

Inside, the all new CX-5 Crossover gets the latest evolution of Mazda’s infotainment system. Its seven-inch display is crisper than before, thanks to a new process that uses optical bonding to join the LCD screen to the touch panel, and the unit now sits high up on top of the fascia.

Other changes up front include a higher-resolution TFT (thin-film-transistor) display in the instrument panel, and the option of a head-up display that can project navigation instructions on to the inside of the windscreen.

Further, passengers in the back seats get a slightly lower hip point, and the option of rear cabin climate control vents and rear USB ports.

Under the skin, Mazda has tweaked the 2.0L/2.5L Skyactiv petrol engines. Modifications to the chassis have increased torsional rigidity by 15.5 per cent, and helped to reduce low-frequency road noise to make conversations about 10 per cent clearer at 60mph.

For the first time in St. Maarten for any manufacturer, the Grand Touring CX-5 will come with iActivsense safety features such as Lane Keep Assist, Pedestrian Detection and ‘SCBS’ Smart City Brake Support. With SCBS, the CX-5 will automatically detect pedestrians or vehicles in front of you with a potential collision, and brake automatically for you, which either completely avoids an accident, or dramatically reduces impact depending on the speed you’re traveling.