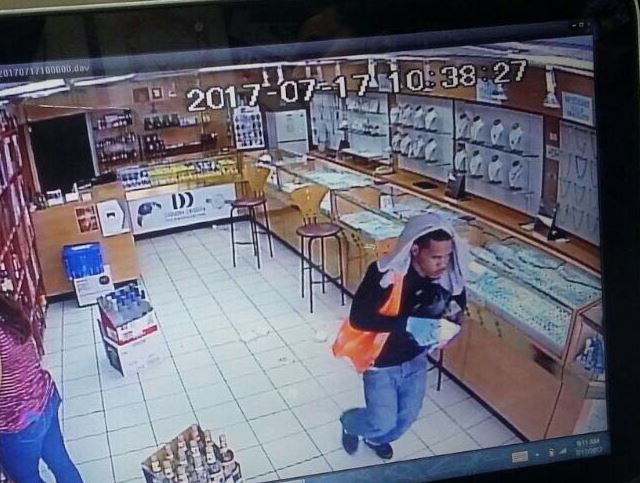 PHILIPSBURG, Sint Maarten — On Monday July 17th at approximately 10.45 a.m. the Emergency Central Dispatch received a call of an ongoing armed robbery at Divinity Jewelers located on Front Street across from L’Escargot restaurant. Immediately several police patrols were sent to the scene to investigate what had taken place.

While approaching the scene three unknown me with their faces covered were seen running away from the scene. The police summoned these men to stop but they refused to do so. Several warning shots were then fired by police. One of the suspects surrendered while the other continued running away.

This suspect was immediately arrested while a search for the other two continued. During the arrest of the suspect items stolen from the jewelry store were recovered. A vehicle which would probably be used as an escape vehicle was also confiscated.

The suspect was taken to the Philipsburg Police Station where he remains in custody for questioning. The search for the remaining suspects continues and the Police Department is asking anyone who may have information regarding this robbery to immediately get in contact with the Detective Department by call 54-22222 ext 213/214, the police anonymous tip line # 9300 or the Emergency Dispatch 911.