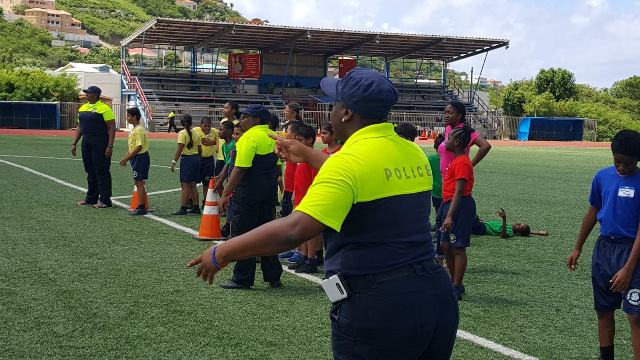 CAYHILL, Sint Maarten — Police cadets presently undergoing the police training are doing exams in the subject “Organizing of events and Traffic Controls.” This module consists of a theoretical and a practical part and is scored by the instructors from the academy.

As part of the theoretical training the cadets chose to organize a sports day for primary school students. The sports day was organized involving approximately 40 students from the Sint Joseph Primary School.

On Thursday June 22nd the students were taken by bus to the Raoul Illidge Sports Complex to take part in the sports day.  At the sports complex teams were formed among the students who competed against each other in several sports events.

All students actively competed in the events and had a fun filled day.  Refreshments and pizza from Domino’s were served after the events. Even the police cadets joined in and took part in the events. The event was a complete success.