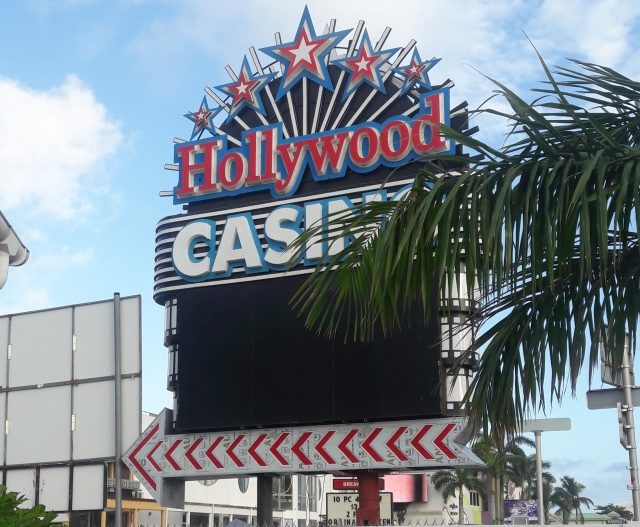 ~ Billboard controls are necessary to protect and preserve~

Our house was built by us in 1981 and is located at the intersection of Billy Folly Road and Welfare Road. We have lived here for 36 years.

In May 2016, we noticed that a huge and hazardous looking billboard was being erected next to our property. The 3 poles placed one above the other would join together the 5 huge sections of the billboard and would be held in place by 6 screws and bolts. The distance between this humongous billboard and our house is less than 6 meters. Because of the size and the intrusion it was of particular concern to us. This billboard posed a hazard.

Since we prefer being safe instead of sorry, we immediately submitted an official letter of protest dated May 9, 2016 to the Ministry of VROMI, which was stamped and signed for receipt on May 10, 2016. The works were halted mid-way, and since then parts of that billboard were left standing at the location and a connecting pole was also left lying alongside the road.

This was our clue that we had not seen the last of it. However, on October 31, 2016, we received letter, reference no. 2717 dated May 17, 2016, from the Head Infrastructure Management / Ministry VROMI, by which we were informed that they gave a negative advice and no permit would be granted by VROMI for the placement of the requested billboard as it was considered to be “unsafe and also cause for great hinder due to the constant lighting patterns.”

We immediately went and obtained more details from VROMI office regarding this “Road Sign” Permit and discovered that the misleading term of “Road Sign” was craftily used instead of the actual term “Billboard.”

Traffic Signs or Road Signs are erected at the side of or above roads to give instructions or provide information to road users. The permit issued under the guise of “Road Sign” is for the placement of the same huge billboard from May 2016. A billboard that is at least two stories higher than our one-level house and would be placed within just a few meters.

At this same intersection of two busy roads, i.e. Billy Folly Road and Welfare Road, there are no traffic signs indicating that drivers on Billy Folly Road coming out of the Pelican area should come to a full stop and give right of way to motorists on the Welfare Road. This has resulted in numerous accidents.

Apparently the need to place a Road Sign/Traffic Sign at this intersection has eluded those in authority, but the granting of a permit for placing a hazardous billboard at the same location has top priority.

We have learned that a Minister who owns the property next door to ours is quite anxious to acquire our property for investment/business purposes and is the main driving force behind the granting of a permit for this billboard. The objective of placing this huge hazardous sign next to our house is meant to nudge us in giving up our home.

It’s rather ironic that exactly on June 1, the beginning of hurricane season, when the Office of Disaster Management advises the population to start preparing for the worst, workers are seen erecting a billboard that can become a dangerous projectile in heavy winds. Furthermore, an already dangerous situation has worsened because there is barely any sidewalk alongside this road and pedestrians, many of whom are tourists, are now forced to step out in the road between ongoing traffic. Will it take a serious accident involving a tourist before proper action is taken by the authorities?

According to what was shown to us at VROMI office, the only modification made on the blueprint is that there are now 2 vertical sets of poles, which will each be held in place by 6 screws and bolts. Screws and bolts that can, and will, eventually rust.

Who will guarantee that it poses no danger during calamities?

The Daily Herald Newspaper recently quoted the Prime Minister: “While government will do everything it can to assist in the case of disaster, government cannot do it alone. And no matter what the hurricane experts may forecast, all it takes is one bad storm to hit us. But like charity, good preparedness begins at home.” It would be commendable if government would really believe and practice what it preaches.

Will we be given a written guarantee that this billboard is not mounted on poles and pillars that could give way as a result of continuous wind pressure, and fall on passersby or private property? Or will it be termed an “Act of Nature?”

Safety should not be compromised at any time. Is government going to give us written guarantee that it’s structurally sound and poses no hazard?

If not, will government compensate us for any and all damages caused by this billboard that is standing on government property and is placed there with government’s approval?

And how does one compensate for bodily harm or loss of life?

In view of the above and in accordance with the Ordinance on Administrative Appeal Proceedings (LAR, A.B. 2010, GT no. 1 and A.B. 2010, GT no. 30) as is stated at the bottom of Government’s Public Announcement in which the issuance of the permit is mentioned, we tried –  with our document in hand – to appeal this decision of granting Building Permit no. 248/16 dated May 19, 2017 at the Court of First Instance St. Maarten within the stipulated 6 weeks.

To our astonishment the clerks seemed at a loss on how to handle this matter. I was told that I would need supporting documents such as blueprints, detailed project reports, etc. Those are documents that VROMI allowed us to view BUT NOT COPY. All we have are our Letters of Protest and the negative advice given to us last year by the Ministry of VROMI.

After much back and forth, they advised us to first either submit a Letter of Protest again to the Minister of VROMI, to seek advice from a lawyer, or pay an amount of NAf. 150 to still initiate a court case.

We are retired senior citizens and live off the income of our accumulated pension benefits.

We are law-abiding citizens who have always dutifully paid our taxes and up to this day continue to do so.

The same cannot be said for the owners of the billboard who, according to various newspaper articles owe millions in back taxes!

Late on Friday afternoon, June 2, 2017, a contractor’s crew started installing the huge monstrosity and worked, with the accompanying loud racket, continuously until 3:00am in the morning of June 3, 2017, to put the 5 sections in place. We witnessed the workers literally TACKING the huge sections to the poles and we have pictures hereof.

We can only assume that there was much haste to complete the job before it could be halted by authorities. What goes up can come down.

We made sure to document the activities with pictures and video.

We have once again, within the stipulated six weeks, submitted a Letter of Protest to the Minister in charge of VROMI.

Billboard controls are necessary to protect and preserve the beauty, character, economic and aesthetic value of land and above all to protect the safety, welfare and public health of their citizens.

Instead of allowing manipulation by special interests, government should do what’s right for the neighbourhood and the public’s safety.

Independence? Really??  If that should ever come to pass, we will really and truly be screwed! 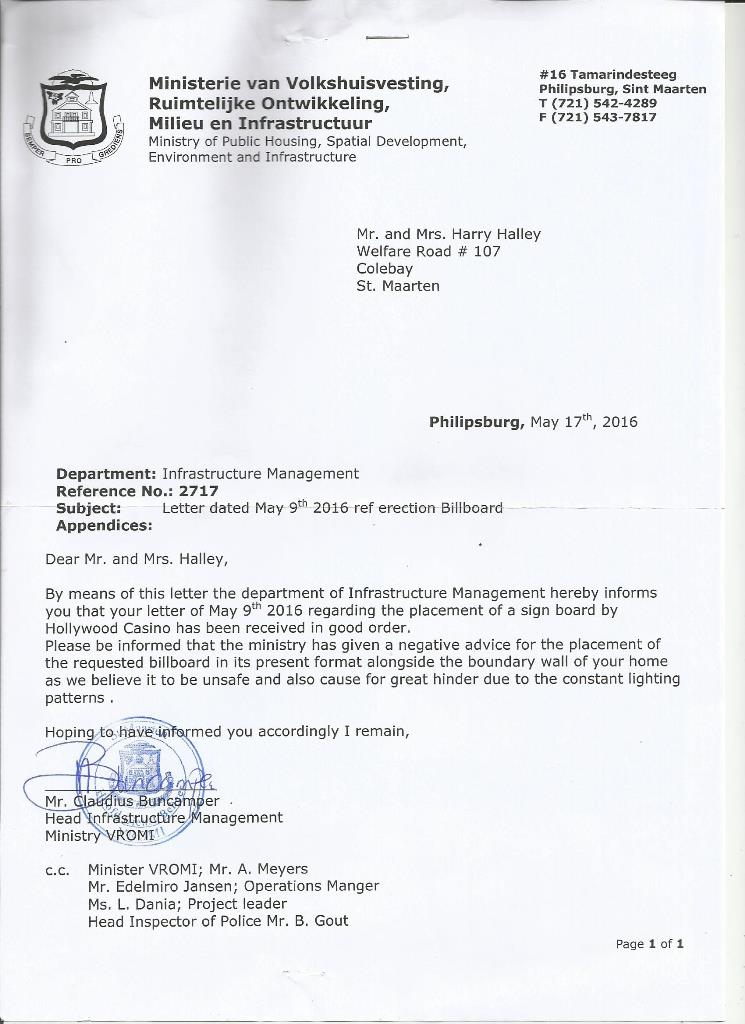