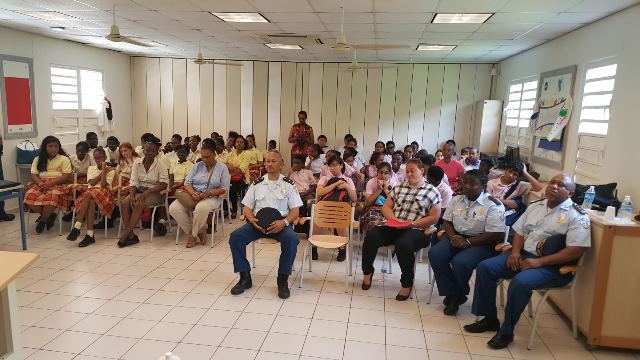 During the first round, the Ruby Labega School defeated the Sister Borgia School eliminating them from moving on to the quarter finals. The topic of this debate was: “Should Students be allowed to drink sodas”. The second round using the same topic was held between the Seventh Day Adventist School and the Oranje School. The Seventh day Adventist School won this round and moved on to the finals against Ruby Labega School. The topic for the final round was “Should animals be caged for entertainment.”

At the end of this debate the championship was awarded to the very strong “Seventh Day Adventist School”.

The Police chief Carl John, the Acting Head of the Uniform Division Chief Inspector Benjamin Gout and the Police Spokesman Chief Inspector Ricardo Henson brought a surprise visit to the debate. During this visit the Police chief expressed words of encouragement and congratulations to all students present and encourage them to continue doing well in school because without an education you are no where. The police chief also congratulated the organizing committee of the school debate, the panel of judges, the teachers, miss Pricilla Bell representing the Department of Education and all other involved in this event, and encourage them to expose these school debates to the public so that they also can see that our youth can do very well school.

He continued to state that the youth of Sint Maarten has been one of the main focuses of the KPSM. The KPSM will continue to engage in positive activities for the youth to bridge the gap between the youth and police.

The Police Chief finally thanked his Community Police Officers for a “job well done” in making this event a successful one.