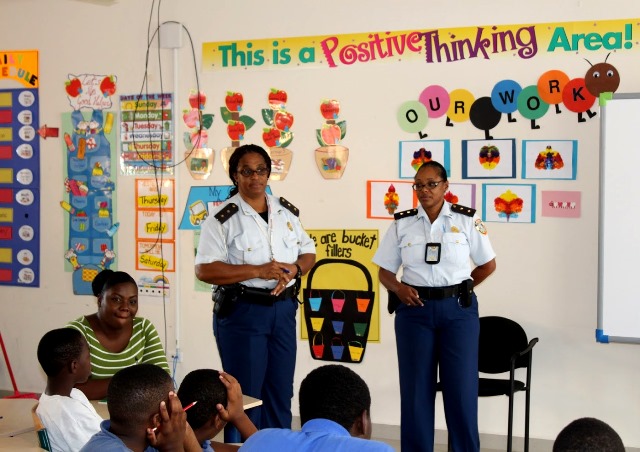 PHILIPSBURG, Sint Maarten — “To serve and protect” is a critical component of the mantra of the Police Force that is extended to all citizens.  In an effort to bridge the gap between KPSM and students, under the lead of the Community Police Officers, a program was implemented to minimize misconceptions while cultivating friendships between law enforcement and students.  The presence of the police in the school as a part of the school community indirectly lends to modifying undesirable behavior and opens up valuable lines of communication.  The program offers the CPOs a platform to invest in the students of their respective districts.  Key is showing their students a balance between the disciplinary end of the law and the lighter side of law enforcement.  They emphasize to students that their concerns are taken seriously and that their well-being, like that of every other community member, is of utmost importance. Out of this vision, the Cops & Kids program was created.

Cops & Kids, a multi phased program, was hosted by the CPOs, D. A. Chandler, S. P. Crispulo, S.P. Carty, E.S Josepha, F. N. Richards, H. Cristina-Romeo, R.V. Henson and A.C. Leonard in collaboration with Priscilla S. Bell, M.A. Ed of the Inspectorate of Education for the Grade 6 students of the various schools. This year a total of 14 schools that amounted to approximately 450 students, participated in the program.  Because of the down time for Grade 6 students after their FBE Exit Exams, the CPOs, in a collaborative effort with the schools, used Cops & Kids to supplement the post-exam programs provided by the schools.   The program was comprised of the following activities:

The various activities were carefully layered, to allow students and CPOs to get to know each other and then transition into the other sessions after establishing a rapport.  Each activity was layered on the foundation that students received in their previous eight (8) years of school and throughout their lives.  Sports skills, Language skills, communication skills, persuasive speaking, critical listening, empathy, negotiation, leadership skills, cooperation, respect, courtesy, winning graciously, losing with dignity, time management, strategic thinking, being encouraging and supportive.  The Cops & Kids program only presented a platform to allow them to use these skills as a group.  One noteworthy experience this year was witnessed between a mother who came out briefly to see the events and saw her son hurt when he was subbed out of the basketball game.  While his response was to walk away from the court and game, his mother encouraged him to go back and support his team.  She encouraged him to learn from his peers. He eventually calmed down and went back to the court and supported his school.

The focus is not solely on what students can learn from the CPOs or from the experience, but also creates an opportunity for CPOs to learn from students; to see the world from their perspective, to share learning and growing opportunities and to encourage students to try, persevere and embrace challenges.  These lead to opportunities for us to celebrate their successes—the attention is not just on whether they won, but more on the fact that they tried.  We want students to understand that we care about the things that are important to them.  Although the time for this project was short, the first and most critical steps have been taken. 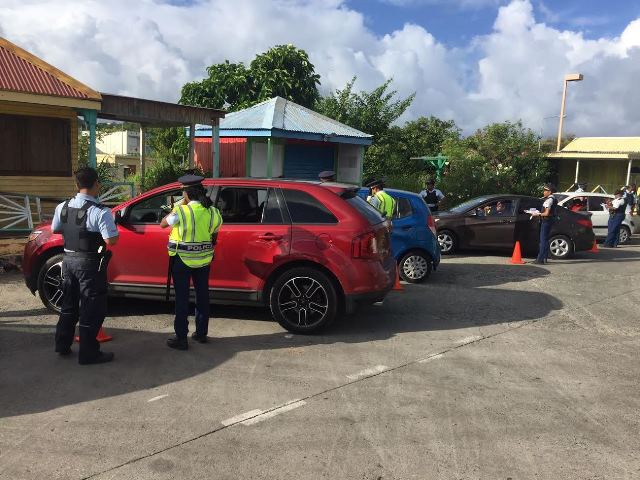 The Gendarmes on the French Side of the island and KPSM assisted by the Customs Department continue to carry out general joint controls as promised using the articles mentioned in “Treaty of Concordia” as a basis. These controls are held with the focus on combating crime on either side of the island in general and mainly armed robberies.

On Friday June 9th between 06.00 a.m. and 09.00 a.m. a joint controls were held simultaneously by both law enforcement organizations at all border crossings.  Both organizations provided each other with the necessary support in regard to the citizens from the respective side of the island.

A total of 25 vehicles were controlled, 02 vehicles were towed and 6 fines were given to drivers that were in violation with the traffic laws. This was a very successful control and other controls are scheduled to be held in the near future.