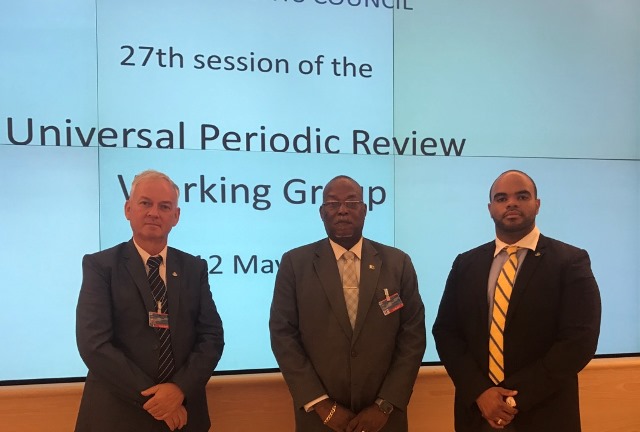 GENEVA – Minister of Justice Rafael Boasman represented Sint Maarten at United Nations Office in Geneva on the occasion of the Universal Periodic Review. The Universal Periodic Review, or UPR for short, is a review of the human rights record of all United Nations member states, in this case the Kingdom of the Netherlands. The Kingdom, and therefore Sint Maarten, is party to a number of Human Rights Treaties.

As a party to a treaty there are a number of obligations that the state must fulfill. These obligations vary based on the content of each respective Treaty. The UPR is unique in that unlike all other Human Rights Treaties it does not concern itself with a specific theme but reviews and holds to account the state party on all human rights treaties and obligations. The UPR allows state parties, in the report that each is obligated to submit to the United Nations, to highlight efforts made to ensure that human rights are safeguarded within its borders.
Sint Maarten’s report underscored progress made in three specific areas, falling under two thematic headings. Under the themes legislation and judicial matters, Sint Maarten highlighted the implementation of the new Penal Code and the new crimes it covers including (financing) of terrorism and money laundering. Under this thematic heading Sint Maarten also highlighted the progress made in combatting human trafficking and Sint Maarten’s most recent ranking in tier 1 in the United States a trafficking in Persons Report. This rank means that Sint Maarten fully meets the minimum standards for the elimination of trafficking in persons. Under the thematic heading of social development, Sint Maarten proudly presented the work it has undertaken in ensuring education for all, with the implementation of the law on compulsory education.
Minister of Justice Rafael Boasman, as representative of the Government of Sint Maarten, joined Dutch Minister of the Interior and Kingdom Relations Ronald Plasterk, Minister Plenipotentiary of Aruba in The Hague Juan David Yrausquin, and Policy Advisor at the Department of Foreign Affairs of Curacao Miloushka Sboui-Racamy, at the Head table to defend the record of the Kingdom during the one-day public hearing.
During the hearing, the bulk of questions posed by UN member states were directed to the Netherlands, but a large number of general questions to the Kingdom regarding pending ratifications, treaty reservations, and the Rights of the Child were frequently received by the delegation.
Minister Boasman in invited comments from the delegates of Algeria, Australia, and the Republic of Korea answered additional questions regarding education access for disadvantaged children, human rights monitoring mechanisms, and adult and youth detention facilities respectively. In so doing, he highlighted the work done by the Constitutional Court, as well as ongoing efforts regarding the prison and the work of the Miss Lalie Center in the area of youth detention and rehabilitation.
The Minister of Justice Boasman continues on to The Hague to hold meetings with Dutch  Minister of Justice Stef Blok and other authorities regarding the prison and other matters of mutual concern, accompanied by Chef of the Cabinet Mr. Len Dijkstra. Mr. Patrice Gumbs Jr, Senior Policy Advisor at the Department of Foreign Relations of Sint Maarten will remain in Geneva for the rest of the week to attend technical meetings related to the Universal Periodic Review including recommendations from other UN state parties and pledges to address matters raised during the hearing.
In his closing remarks, Minister Rafael Boasman reiterated the Government’s commitment to the promotion of Human Rights on Sint Maarten and commended the work of the Human Rights Council in this regard.