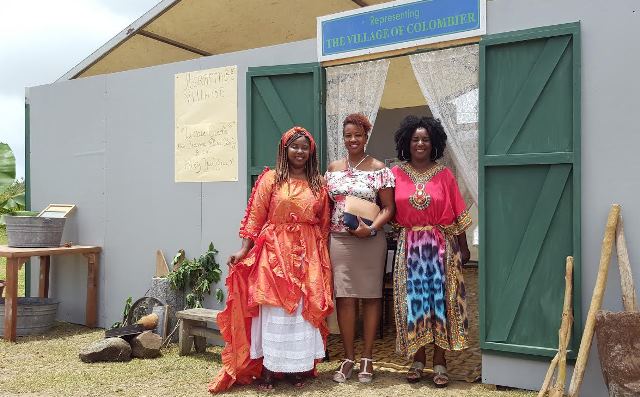 ST. LOUIS – On Sunday May 21st, Minister of Culture The Honorable Silveria Jacobs visited the annual Rambaud St. Louis Freetown Fete. The annual fete is organized by the Rambaud – St. Louis Committee led by Mr. Etienne “Rocky” Andrew. While at the fete Mr. Rocky Andrew accompanied Minister Jacobs on a tour of the different booths with their cultural and historical display

On display were traditional foods and drinks with music from Tanny & the Boys in the background along with presentations of locally made dolls, milking of the cow, traditional hair wrapping techniques and much more.

Minister Jacobs enjoyed her time at the cultural event and commended the Rambaud-St. Louis Committee for bringing along other associations and making the fete bigger and better. It was especially heartwarming to see the time and effort that went into the re-creation of a traditional house from back in the day, depicting how St. Martin families lived in simple and clean surroundings, learning self sufficiency and survival with the little that we had.

“Many of the artists were proud to display and explain their crafts, and many expressed concern of there not being enough interest to see the cultural art-forms continue. As Minister I can echo their sentiments, and pledge to work towards mandating that cultural arts and crafts, as well as the preparation of local food and drinks being structurally taught in schools,” Minister Jacobs said.