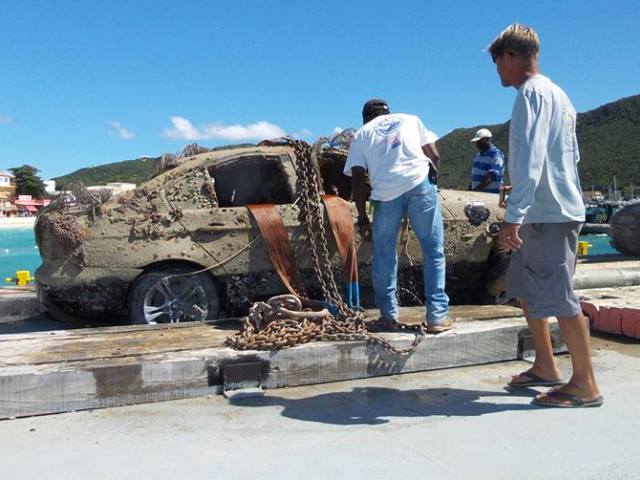 In the month of January 2010 family members of R. Brous filed an official report with the authorities on the French Side of the island stating that he had gone missing and had not returned home. He had been last seen driving a blue rented BMW. The police authorities on the Dutch side of the island were also informed about this missing person and joined in the search to locate R. Brous however; this lengthy search did not have any positive results.

On Monday January 23rd 2017 in the morning at approximately 09.00 a.m. police was called to Great Bay to investigate a case involving a vehicle which was found submerged approximately 200 meter from the shore line in the vicinity of the Walter Plantz Pier. A local diver discovered the vehicle while diving in Great bay harbor and immediately notified the police. The vehicle in question was a BMW with four doors which showed signs of being submerged for quite some time. The vehicle was removed from the water at which time during the investigation, what seemed to be human remains, was found in the vehicle. The vehicle and the human remains were confiscated for further investigation.

As part of the investigation to identify the person whose remains were found in the vehicle, a DNA sample of the human remains and that of a close family member of R. Brous were taken and sent to the National Forensic Institute in the Netherlands for comparison. The results that came back regarding this DNA investigation are that the human remains that were found in the vehicle are those of R. Brous. The investigation done on the vehicle also indicates that this is the same vehicle that R. Brous rented on the French side before he went missing. The investigators of this case, thus far, did not encounter any evidence which indicates that the death of R. Brous was the result of a criminal act. The cause of death of R. Brous is still unknown.

This visit was to discuss planned joint controls, exchange ideas, and discuss common problems among many other issues, and in doing so making good use of the recently signed working relation agreement between authorities on either side of the island.

This agreement has created great opportunities and possibilities for the police department and Gendarmes to work much closer concerning traffic issues.