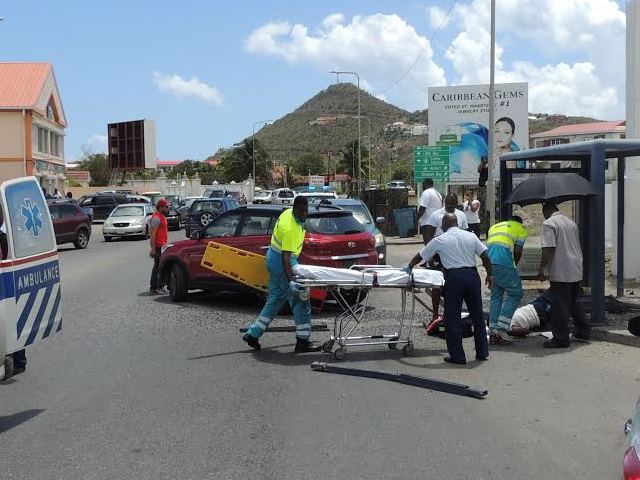 CUL de SAC, Sint Maarten — The Police Traffic Department is investigating a traffic accident during which a lady was struck by a motor vehicle and was seriously injured while sitting in the bus stop.

The incident took place on Tuesday April 11th at approximately 12.50 p.m. on the A. J. C. Brouwers road in the bus stop in front of Guardian Group Insurances next to the Yogesh Building.

According to the investigating officer a SUV with license plate P-7793 driven by a female with initials M.L.S. (40) for unknown reasons plunged through the fence of Guardian Group Insurances and the  through the bus stop where the victim was waiting on a bus.

The victim with initials S. H. (51) was over run by the SUV and suffered numerous deep cuts and serious bruises to her legs and arms from which she was bleeding. The victim also complained of intense pain in her upper body.

The victim was treated on the scene by paramedics and then transported to the Sint Maarten Medical Center for further treatment and was admitted for observation.