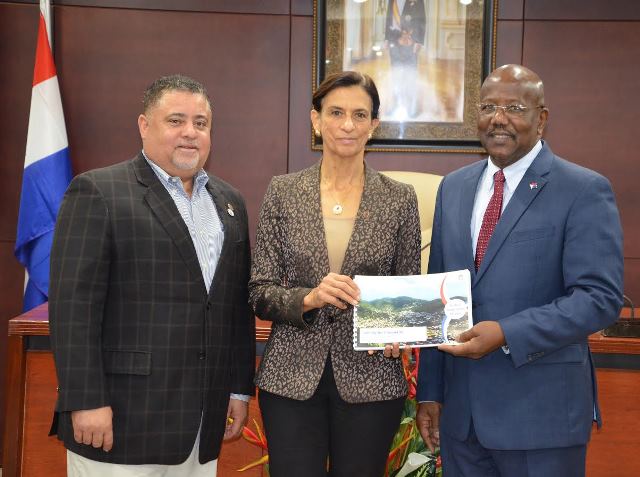 PHILIPSBURG – On Thursday, March 23, Prime Minister William Marlin presented, as part of the launch of the governing program 2016-2020 “Stability for Prosperity!” a hard copy of the program to Parliament. The presentation was made to Chairlady of Parliament Sarah Wescot-Williams and Member of Parliament (MP) Frans Richardson, second Vice Chairman.

The governing program outlines the vision and strategy for the governing period. The program was formulated by a workgroup established by the parties that rejoined forces after the 2016 elections – the National Alliance, the United St. Maarten Party and the Democratic Party – under the umbrella of the United Democratic Alliance.

According to the Prime Minister, “the continued union of the United Democratic Alliance is a solid base to ensure the achievements towards the stability and growth of St. Maarten. Given the parties’ desire to continue developing a sustainable, equitable and flourishing St. Maarten for all the governing program 2016-2020 has been named ‘Stability for Prosperity!’”

It is the intention that at the beginning of April a formal presentation to the members of Parliament will take place. At that moment the Prime Minister will provide a general overview of the 5 strategic objectives of the program: Nation building and good governance; Sound financial management; Public safety; Socio-economic and environmental sustainability and Enhanced quality of life, while each minister will present their concrete action plans of projects and initiatives for the coming year, which are formulated taking into consideration the feasibility, present operation, available human resources, and the financial capabilities of the respective ministries.

“The governing program forms a solid foundation on which ministers and their respective ministries are expected to build upon. It serves as a road map to government, St. Maarten citizens, and the private sector for the country’s journey towards prosperity in the coming years.”

As the Council of Ministers is committed to open and transparent communication, different channels and methods of communication such as Facebook will be used to include and inform all stakeholders; a special website has been created where a full copy of the program can be viewed and downloaded: www.StabilityForProsperity.sx.

Monitoring and reporting will also form an integral part of the way the Council will work throughout this governing period.

As part of the launch, a personal message by Prime Minister Marlin was e-mailed to all civil servants emphasizing their essential role in the execution of the governing program.