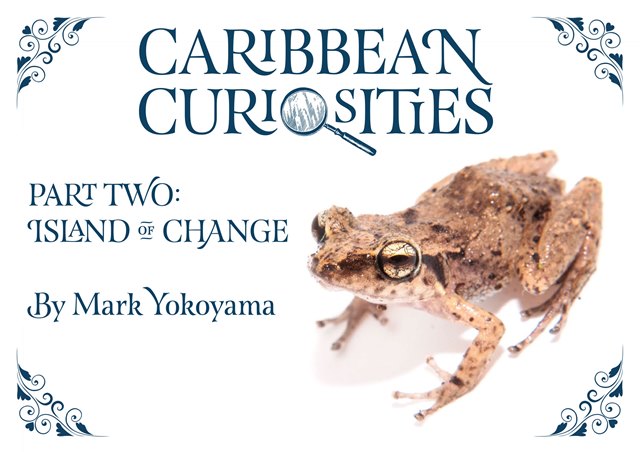 GRAND CASE, St. Martin – It’s only been two months since Amuseum Naturalis officially launched its 2017 season in January, but the free natural history museum has already had over 5,000 visitors this year. To celebrate, Amuseum Naturalis creators Les Fruits de Mer are sharing a free e-book: Caribbean Curiosities: Island of Change.

This e-book is the second volume in a series highlighting the plants and animals featured in the museum. Both volumes are available for free from the resources section of the association’s website: http://www.lesfruitsdemer.com. This volume highlights some of the many species that were introduced to the island by humans, and how they are changing St. Martin’s local ecology.

“The Caribbean Curiosities e-books are a chance to build on the stories we are sharing at the Amuseum,” explained Amuseum curator Mark Yokoyama. “They’re also a chance to share some of the magic of the Amuseum with people who haven’t had a chance to visit yet.”

Amuseum Naturalis is open on Tuesdays and Thursdays from 4:00pm-8:00pm and admission is free. Group visits, for school classes, youth groups, or any kind of group, can be scheduled during March and April by emailing: info@lesfruitsdemer.org or on Amuseum’s website.

“We’re surprised and excited to have welcomed 5,000 visitors in just two months,” commented Les Fruits de Mer President Jenn Yerkes. “It’s so fun to share the island’s natural history with a diverse group of locals and tourists each week. We also hope to host more school classes and other group visits, so please get in touch!”

Amuseum Naturalis is a free, public pop-up museum of the natural history of St. Martin and the Caribbean, created by Les Fruits de Mer and made possible by the generous sponsorship of Delta Petroleum and the support of the Friends of the Amuseum. Amuseum Naturalis is located at 96 Boulevard de Grand Case in Grand Case and on the web at http://amuseumnaturalis.com