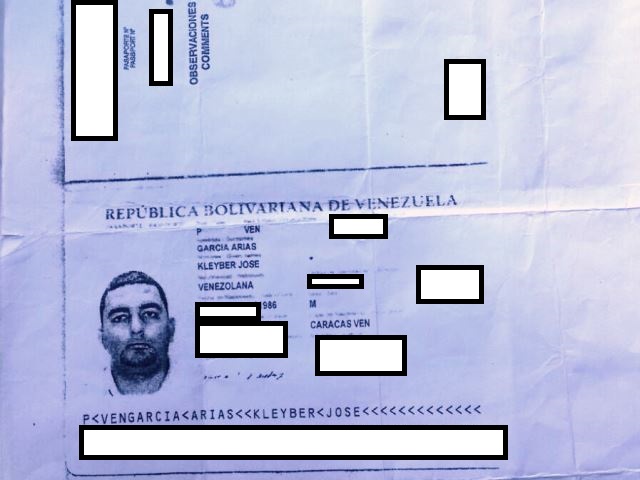 1 in every 113 people on earth is an asylum-seeker, internally displaced, or a refugee. How many people do you know? Stand #WithRefugees pic.twitter.com/JAIhpGAMBu

~Immigration is aware of 4 individuals who want to asked for asylum in St. Maarten~

PHILIPSBURG, St. Maarten – About three weeks now Kleyber Jose Garcia-Arias (30) from Venezuela, has been incarcerated at the police station section of the Immigration Department, after he and his companion had a domestic dispute at an address on the Dutch Side. His companion had called the police for him.

Garcia-Arias was surprised to see police at the location, who questioned him as to the nature of the domestic problem. 721news understands that an argument started between him and the officer, who had responded to the call.

Garcia-Arias told the police he did not call them, and the matter was a personal issue, however, the intervention soured after he spit at the police officer, which resulted in his arrest. This incident occurred about three weeks ago. Since then Garcia-Arias has been in lock up. According to information reaching our newsroom, the police handled the case following normal procedure. He was booked for the minor offense towards the officer. The consequence would be once the case reached the Prosecutor’s Office he would have been fined and then released.

Police proceeded to turn Garcia-Arias over to Immigration to be deported to Venezuela, however, Garcia-Arias has a valid French document issued by the Pour le Prefet. This document states he has legal status and is considered a refugee under the French Asylum Law (Attestation de demande D’asile procedure normale). The Immigration Department is refusing to accept and understand that he has a legal document that considers him a refugee under French law.

Normally Garcia-Arias would have to be turned over to the PAF, and he would be reprimanded, and would not be allowed to cross the border anymore.

Last month, Immigration together with Police raided a house in Cape Bay where an undisclosed number of Venezuelans were arrested and later in the night brought to Marigot by the French immigration, because they were also considered refugees under the French Law, and had the same documents as Garcia-Arias, in their possession.

Information reaching 721news say that a high ranking police officer (name known) is using his position to force this man to be deported regardless of the legal document. It was also said by a family member of the man, whom we contacted, that Garcia-Arias’ companion may have some sort of relationship with a Dutch side officer, which may also be another reason for having Garcia-Arias deported.

The family member is asking that Minister of Justice Rafael Boasman look into this matter as soon as possible, because by deporting him, St. Maarten will be breaking International and European laws and agreements signed to protect refugee’s rights. 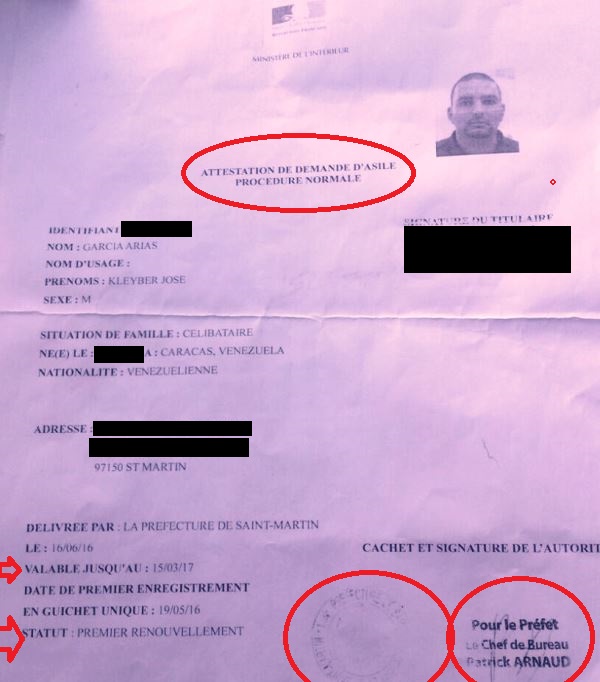 Another case 721news is busy working on involves four individuals, who are stuck on a Caribbean island, and are claiming that their lives are in danger after a secret operation went bad. The individuals contacted the St. Maarten Immigration Department, and also notified the Government of Holland via official channels like the Ministry of Foreign & Interior Affairs, and also a Dutch Consul within the Caribbean for help, as they are trying to reach St. Maarten.

They have notified top officials of Immigration and Law Enforcement and the investigating body of St. Maarten to help them reach so they can share some valuable information. According to reliable sources, this case has been ongoing for about a month without any success from the Government of St. Maarten giving permission to allow them in.

The individuals are in hiding on an island in the Caribbean, and are claiming that there are more persons in similar situations, who are too afraid to seek help.

Via our source, they are also asking that the Minister of Justice of St. Maarten look into their situation, seeing the fact that their lives are in danger, and based on laws and agreements signed at international meetings, the Dutch Kingdom will do their best to protect individuals, who come from countries with unstable Governments, and cannot be sent back due to fear of imprisonment or death.

Editor’s Note: 721news hopes Minister of Justice Rafael Boasman looks into these two cases.
If St. Maarten Immigration deports Garcia-Arias, it will put not only St. Maarten, but the Dutch (Government) Kingdom in a negative light, among other European countries based on international treaties that were signed.

In the second case, it is in the interest of St. Maarten Law enforcement to get the Intel information that is being offered to them and the investigating body. However, it looks like no-one wants to take the first step to allow these individuals to enter into a safer environment. It is a fact that our borders are not 100% closed, and on a daily basis people from all nations overstay and continue to live here. However, their lives are not in jeopardy like these four individuals.

“No parent chooses to put their children on unsafe boats unless they really see no other way to get them to safety” @HTDGTour pic.twitter.com/ANIjmMeOn7

The UN refugee agency and the European Commission have signed two agreements aimed at strengthening the two institutions’ cooperation on refugee and asylum issues and operations both inside the EU and across the world.

BRUSSELS, Feb 15, 2005 (UNHCR) – The UN refugee agency and the European Commission today signed two agreements which will strengthen their cooperation on the development of European asylum laws, and on policy and assistance for refugees both within the European Union and beyond its borders.

During a visit to Brussels, the UN High Commissioner for Refugees, Ruud Lubbers, signed a Strategic Partnership Agreement with the External Relations and European Neighbourhood Policy Commissioner, Benita Ferrero-Waldner. This agreement is intended to consolidate, develop and better structure existing cooperation between UNHCR and the European Commission (EC) on protection and assistance for refugees and other people of concern to UNHCR outside the borders of the European Union.

Lubbers also signed another agreement, in the form of an exchange of letters, with EC Vice-President Franco Frattini, who is Commissioner for Justice, Freedom and Security – formerly known as Justice and Home Affairs. This agreement will facilitate greater cooperation on asylum and refugee protection issues, and builds on a previous arrangement geared to the first phase of EU harmonization of asylum which was completed in May last year.

The refined form of cooperation, outlined in the exchange of letters, takes into account the new orientation of European refugee policy laid out in the 2004 Hague Programme – the EU’s action plan on asylum issues over the next five years.

UNHCR’s key role in the development of EU policy and legislation on refugee matters is firmly established in European Community law. The Amsterdam Treaty (Declaration 17) requires consultation with UNHCR on matters related to asylum policy, and obliges the Member States to adopt laws on asylum which are in accordance with the 1951 Geneva Convention on the Status of Refugees. The new EU Constitutional Treaty (signed in November 2004 but awaiting ratification by all EU states before it enters into force) also guarantees the right to asylum, through the Charter of Fundamental Rights of the EU.

The two agreements signed today will supplement these legal obligations with practical cooperative arrangements to facilitate and intensify UNHCR’s work with the European Commission on policy as well as practice, including in the delivery of aid for refugees.

The Strategic Partnership Agreement commits UNHCR and the European Commission to maintain their dialogue on policy, and continue to exchange information and strategic assessments. In addition both institutions will continue to promote respect for international refugee law, and work to identify durable solutions for refugees in “third countries” (i.e. countries that are neither members of the EU nor the home country of asylum seekers or refugees).

In addition to the technicalities of future cooperation between UNHCR and the EC, a number of “overarching themes” are laid down in the Strategic Partnership Agreement. These include ensuring promotion and implementation of the 1951 Geneva Convention relating to the Status of Refugees and its 1967 Protocol, as well as support for policy making and capacity-building for the development of asylum systems in third countries.

The two institutions also agree to cooperate closely on the “assessment of new crisis situations and developments regarding existing crises, including analysis on addressing root causes, needs for assistance, the means of promoting coordinated responses and the exchange of early information about strategic decisions and actions, including strategies for withdrawal from an assisted area (‘exit strategies’).”

UNHCR and the EC also pledge “to better prioritise and synchronise their action with a view to ensuring an effective transition from emergency assistance towards durable solutions” (including sustainable voluntary return of refugees and other people of concern to the UNHCR, as well as, when appropriate, resettlement and local integration). In this regard, the two institutions agreed to encourage close co-operation with other UN Agencies on various EC and UNHCR concepts – for example ‘Linking of Relief, Rehabilitation and Development’ and the “4Rs” (Repatriation, Reintegration, Rehabilitation and Reconstruction).

The Strategic Partnership Agreement was signed on the same day as the new exchange of letters between Mr Lubbers and Vice-President Frattini, which deal primarily, though not exclusively, with asylum issues within the European Union itself. These also call for further dialogue on policy issues related to refugee protection between UNHCR and the European Commission, as well as “regular and systematic exchanges of information and analysis on particular issues arising from Member States’ national law and practice in relation to the Common European Asylum System and how that affects the situation of refugees, asylum seekers and other persons of concern to UNHCR.”

Among other things, this will involve monitoring and analysis of national law and practice on asylum, encouraging greater practical cooperation between national asylum services, and work on developing regional protection programmes as proposed under the Hague Programme in the framework of the Strategic Partnership on refugee protection in third countries.

“These agreements will strengthen the strong working relations and collaborative efforts to address the many refugee challenges facing UNHCR and the EU, both within Europe’s borders and beyond,” said Judith Kumin, UNHCR’s Representative in Brussels, who was closely involved in negotiating both agreements. “Cooperation and coordination between the EC and UNHCR can help both parties achieve more effective results. It is symbolic that, on the very day that they were signed, UNHCR and the European Commission are jointly chairing an important session of strategic consultations on Afghanistan, highlighting the scope and will for further collaboration.”