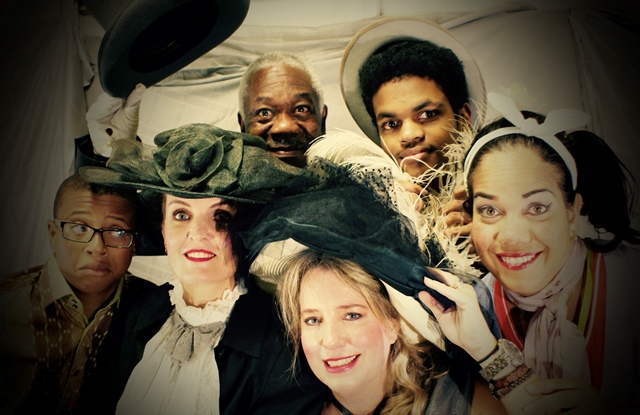 ~ Director brings life of theatre experiences to Behind the Beyond ~

PHILIPSBURG – There’s much talk in the air about the upcoming National Institute of Arts (NIA) production of the “Ridiculous comedy” Behind the Beyond, which opens at the John Larmonie Center, Long Wall Road, February 17.

Written by Canadian Humorist, Stephen Leacock, and directed for the local stage by Ukranian-born director Albina Matuzko, Behind the Beyond is a play in three acts dealing with love, betrayal, pomp and hidden agendas.

It is set in London, in 1910, and deals with themes that are as relevant today as they were in the nostalgic times of the past.

Behind the Beyond is being billed as a ridiculous “fake” comedy with exaggerated expressions of love and life, riddled with irony and sophistication. Where the play comes into its own, is in its interpretation of unfolding events – we see a play being acted within a play – and where interactions take place involving an audience that is an essential part of the action.

The production will be taking place in the intimate setting of the John Larmonie Center where a dance floor – come Pilates class – come performance hall – come musical recital space, has been transformed into a magical stage setting with three separate, but completely connected parts.

It’s a transformation to a different time and place, complete with genuine period costumes and lovingly rendered stage sets that are designed to form an elaborate illusion of time and place and stimulate the visual senses.

The players charged with bringing their characters to life and some of whom are making their appearance on stage for the first time, were chosen by director Matuzko, who staged auditions in the honored tradition putting together a troupe of players.

All cast members admit to having had to stretch to the limits to maintain demanding professional and academic commitments while keeping up with the equally demanding hours required for rehearsal. The time they have also had to give up in their own personal and family lives during the past weeks has also been immeasurable – a fact that director Matuzko does not fail to recognize or appreciate at every opportunity she gets.

In molding her cast of players, the director says her challenge has been to find theatrical ways and means to convey the flavor of the message of the humorist Leacock, to this modern time, in a manner that is immediately recognized and understood. For this she has called on her extensive experience working in theatre and theatrical productions all over the world, starting with her studies at the Kiev Academy of Fine Arts in the Ukraine where she was also a theatre director.

As a theatre teacher at the NIA Theatre Lab, Matuzko conducts weekly theatre workshops for children and adults. In the community she gives artistic and team-building workshops to schools and organizations, however, for the past few months, to say that her life has been consumed by her production of the play Behind the Beyond, would be something of an understatement.

For the past weeks she has been clocking up 12 to 16–hour days to fill in demanding work schedules so that she can devote the maximum amount of her time to all things associated with Behind the Beyond.

“A major challenge has been working in a space that is not a purpose-built theatre where your stage and lights and sound are set and all you have to do is come in each time to rehearse and then perform and then leave,” said Matuzko.

“For our production of Behind the Beyond we have to set up our stage before each rehearsal (sometimes all three acts in the play) and take down our sets at the end of rehearsals. It’s very tiring and it can be very frustrating for the director and also for the performers themselves, especially when it interrupts the flow of the work, but that is the reality of working in a space that is not a theatre in the true sense of the word,” said the director.

She says she is most grateful to NIA for having the space at all and to the many groups and organizations making use of the venue who are being disrupted by the daily demands of her production for rehearsal space and storage of sets and props.

“Having worked all around the world, and considering the amazing talent I am exposed to here on St. Maarten every day, I think it is a great disservice to that talent for the island not to have its own theatre that is used only for these kinds of productions,” offered the director.

With her former work as a director of theatre in Ukraine and also with her work in clown and physical comedy in Europe and Canada, Matuzko has been spoiled by the quality of theatre facilities and venues that she has had to work with – most of which have been at a very high professional level.

Closer to home, she has worked in theatre on the French side of the island, where she has seen an old building taken over by local theatre-lovers, and made into a theatre with its own unique charm and character, that has served as a venue for world class performances for many years.

“Such a venue is sadly missing here and I personally think that is a shame because it would serve to develop and expose some of the most amazing talent I have seen here that is just bursting to come out,” continued the director.

Thankfully it was the lack of affordable space that led to the creation of the so-called Black Box Theatre that is the venue of NIA’s John Larmonie Center theatre workshops and staged performances.

“The Black Box Theatre of NIA offers artists a lot of independence and the Directors of NIA have a right to be very proud of what they have created, even though they also would like to see a state-of-the art theatre hall built on St. Maarten one day,” said Matuzko.

For now Matuzko is content to direct her massive reserve of energy toward fulfilling her own personal dream and ambition to bring the art of theatre to a wider audience on St. Maarten, so that others can enjoy some of what has become much of her own life’s work.

She has been involved in theatre since age 12 and spent her teen years learning her craft with a professional Youth Production Company playing sometimes between 40 and 60 shows a year, before audiences of hundreds of persons.

“I do not have all the professional backstage, costume, light, sound and prop departments that directors in other countries may have, I do however have one of the main things that is constant to all – an amazing cast of people who dedicate their agendas and souls to what they do – in this case, to the production of Behind the Beyond,” continued the director.

She is adamant that her involvement in her first theatrical production on the island is also now her most valuable experience to date.

“This makes all difficulties and challenges of facilities and space immaterial and unimportant and I cannot find the words with power enough to convey my appreciation to my cast and also to the Directors of NIA, Clara Reyes and Arlene Halley for providing me with access to two promising performing arts students, Zack Phipps and Ray-Angel Simon and for having faith in my work. I am also most grateful to me everyone who has given support, including fellow drama director, Loes Nauta,” continued Matuzko.

She says it has been a joy to come to St. Maarten from the Netherlands and lists amongst the countries that her work has been seen as: Japan, Bulgaria, Poland, Andorra, Austria, Brazil, Denmark, Slovakia, Slovenia and Belgium. Add to that mix the influences she has gained from her Mentors in Argentina, France, The Netherlands, Spain and Canada and you can begin to see how wide the director’s theatrical range extends.

“I think it is magical and a wonderful coincidence that I am realizing my artistic dreams here on St. Maarten. I am full of hope that as a stranger, my art, which is different and merged with all styles and approaches that I have explored on my journey to the island, will be received with open arms,” added Matuzko.

The artist and director has a credo that she likes to reference: “Theatre is a place where people can discover the real beauty of human being in generally, their own Unique “I” and it’s connection to this Amazing Universe. Places where their souls can touch each other. Where they can experience and WONDER “another” world beyond of their “reality”.  I believe that through the ARTS it is possible to touch that DIVINE in each of us that makes us human beings.”

She also has her own treasured supporter and husband, Cor Sikkes, without whom none of her current dreams would be realized.

“I began to direct again only because I knew I could count on the full support of Cor, whose artistic ability and talent I find to be immense. He understands my visions and creative intentions and works very hard behind the scenes to help me make my projects work, so I am also very happy that the quality of his own work is an important part of our production for everyone to see,” added Matuzko.

Behind the Beyond is playing at the (Black Box Theatre) John Larmonie Center, Longwall Road, Phillipsburg, St. Maarten on the following dates: February 17 – February 18 – February 24 – February 25 – March 10 and March 11. All performances begin at 8:00pm sharp.