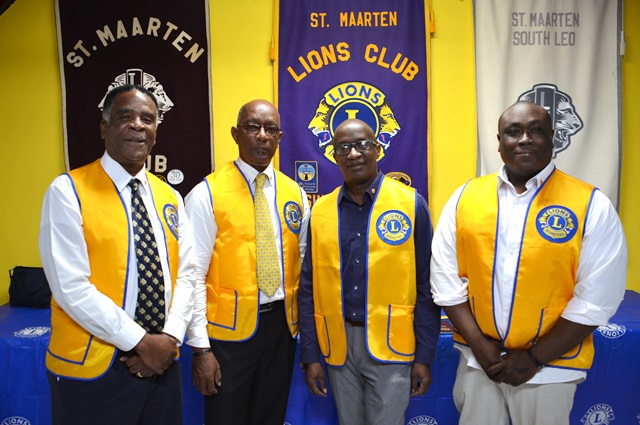 The Lions Membership Committee led by Lion Oralie Boirard organized the entire process for the new members. In order to become Lion members, all four attended numerous Lions meetings and projects over a two-month period along with following an orientation night with their spouses or partners in Service, where they were fully informed about the Lions Club organization locally, on district level and at International.

The four prospects also worked hard at the Lion Wally Havertong Christmas Bingo Spectacular and attended a club social in December as well.

Club President Woods said, “As President I am delighted to have new and enthusiastic members in the club, which will give us new energy to go out and do community work. Based on how I have seen them perform, I am happy with the new member’s willingness and dedication to serve and we will be adding one female to the club upon her return to the island later this month.”

Immediate Past President Louisa was awarded the Melvin Jones Fellowship award at the ceremony as well. Lions Clubs world-wide recognize outstanding individuals by bestowing on them an award that is named for its founder, Melvin Jones. This award is the highest form of recognition and embodies humanitarian ideas consistent with the nature and purpose of Lionism.

The President and Board awarded Louisa the Melvin Jones Fellowship award based on his hard work and dedication to community service over the past years since becoming a Lion in May 2008.

For additional information about the St. Maarten Lions Club and their various fundraising and community projects, email: dailyboard@sxmlions.org or visit their Facebook page.