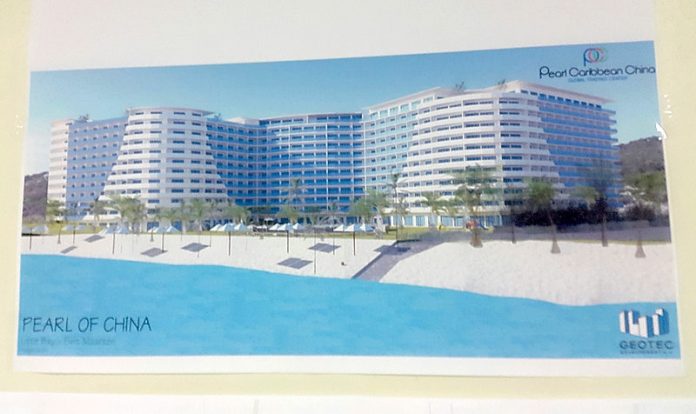 PHILIPSBURG – During Wednesday’s, January 11, Press Briefing Minister of Finance Richard Gibson gave an update on his trip to Curaçao where he met with the Consul General of China to discuss the Pearl of China project.

He said during a lunch meeting in Curaçao, a letter sent by the Prime Minister to the Chinese government “expressing that we welcomed the entire project of Pearl of China, and that we’re moving forward to see how we can accommodate all that needs to get the project off the ground,” was discussed. The project is being vetted by VROMI, and is projected to begin in March. “If all goes well, there is no reason at this point in time to deviate from that original projection,” he stated.

In addition, he provided clarity on the monies owed to St. Maarten after the dismantling of the Netherlands Antilles, and settlement of the assets. “The amount was approximately 60 million, but that’s not all there. One of two items that also has to be divided that did not form part of the original division process, and one of them was a company called SAO, social economic development organization, that lends money to government-owned companies. That foundation is dormant, and has a balance sheet and there’s substantial money in that balance sheet. And St. Maarten’s share of that company is being projected to be about 7 million, so altogether it’s 60 million, plus 7 million is 67 million,” he explained.

“We have not received any money so far. The discussions are still ongoing. There was supposed to be a video conference yesterday between the three countries Holland, Curaçao and St. Maarten.  It was postponed until next week because of somebody being unable to attend, but those discussions are nearing its end, and hopefully can be concluded very shortly,” he continued.

In addition, he mentioned that his Ministry was working to “improve financial management to a point that at least we could show improvement compared to years gone by, and it’s very simple if you’re preparing financial statements.”

When asked about the idea of establishing a National Development Bank, Gibson indicated that “We are committed to proceed and have that development bank.”