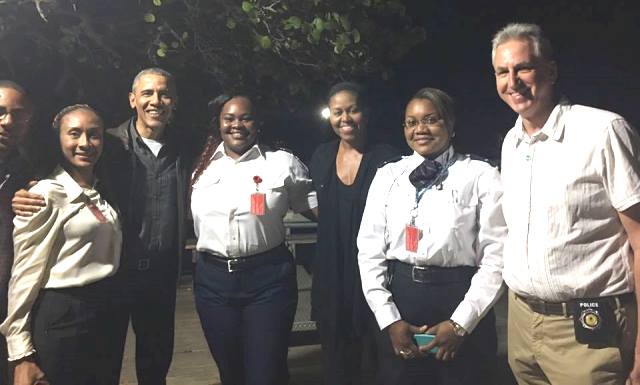 BEEF ISLAND, VI- This news site first and accurately reported earlier this evening, January 23, 2017 that former US President Barack H. Obama and wife Michelle L. Obama were expected in the Virgin Islands in a matter of hours.

We can confirm that the Obamas have arrived in the territory.

According to our reliable sources, Mr Obama and his wife landed at Terrance B. Lettsome International Airport, Beef Island on a private jet sometime around 8:00 P.M.

The couple took some photos with persons in the area before being whisked away to Trellis Bay dock where they boarded a vessel to Necker Island.

Mr Obama and his wife Michelle were greeted at the airport by Heads of Department of Government and elected officials.

– the first black President of the United States of America will be accompanied by his Michelle L. Obama

Word just reaching our newsroom from our trusted sources within the ruling National Democratic Party and our contacts in Washington DC is that former President Barack H. Obama (D) is expected to visit the Virgin Islands (UK) within the next two hours, January 23, 2017.

President Obama, the first black President of the United States of America who served his last day in office of an eight-year term on January 20, 2017 was succeeded by President Donald J. Trump (R).

The Premier’s Office and local officials are tight-lipped on his vacation itinerary while in the British Overseas Territory.

Our newsroom can confirm further that former First Lady Michelle L. Obama will accompany the former two-term President. It is not clear at this time whether the couple’s children, Malia and Sasha, will also be visiting the Virgin Islands.

Mr Obama and his wife will reportedly be staying at Necker Island, the private island owned by British billionaire and VI Belonger Richard C.N. Branson.

Our newsroom will be the first to bring you photos when the former President and wife arrive in the territory.