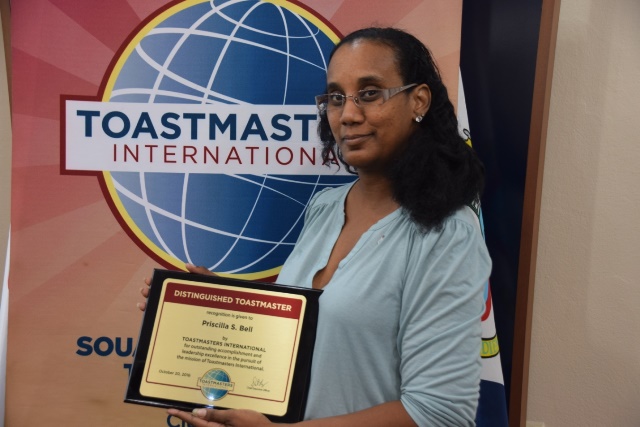 PHILIPSBURG – Achieving the distinction of Distinguished Toastmaster (DTM) is a goal that most toastmasters strive for. It is the penultimate status within the Toastmasters program.

The program is comprised of a communication as well as a leadership track. Within the Communication track there are a series of structured presentations to be given while the Leadership track is comprised of varying leadership roles that need to be completed. St. Maarten has been diligent in producing competent communicator and leaders, and an eighth distinguished toastmasters has been added to its list, DTM Priscilla S. Bell.

Bell, a civil servant, joined the Soualiga Corporate Toastmasters Club in October 2013. Because of her various capacities on the job to make presentations, Bell opted to empower herself and followed the program. Pacing herself to complete the program in an appropriate amount of time, she committed to completing three goals per Toastmaster year.

In July 2016, she completed the Toastmaster program and was registered as a Distinguished Toastmaster as of October 2016. Bell has served her club as Vice President of Education, the District as Administration Manager (District Secretary) and is currently serving as an Area Director for 3 of the clubs on St. Maarten and a fourth on St. Eustatius.

Bell is also a member of the Phillipsburg Toastmaster Club, which is the oldest club on the island. She credits her success through the program to the tremendous support received from all the clubs on the island. “Every time I experience someone’s presentation, I learn something new about giving presentations,” she said.

“Like a lot of people I too was hesitant to speak publicly. I was afraid of failure, my compulsion to do a good job was keeping me stagnant. In my Toastmaster journey I gave presentations that were applauded, but I also gave presentations that were total disasters. Everything that could have gone wrong, did. I was living my nightmare, it would have been easy to quit, but I had to hold tight to my ‘why’ I was doing this and dig deeper. It is obvious that my failures have contributed just as significantly to my success,” she stated.

Looking back at the journey, Bell describes it as “priceless.” While the work place is designed to be cut throat, with an ‘every man for himself’ mentality, every Toastmaster meeting puts you in the company of other determined persons who are pushing you to be successful. There is not a Toastmaster who has not contributed in one way or another to Bell completing this program. Everyone who evaluated, timed or made her conscious of her use of fillers, or came out to meetings and encouraged her to the lectern, made an impact.

Anyone who wishes to improve their communication and leadership skills is encouraged to visit any of the 6 Toastmaster clubs on the island.

The Soualiga Corporate Toastmasters Club meets on the 2nd and 4th Wednesday of every month. Interested persons can email: vpmsoualiga@gmail.com for more information.