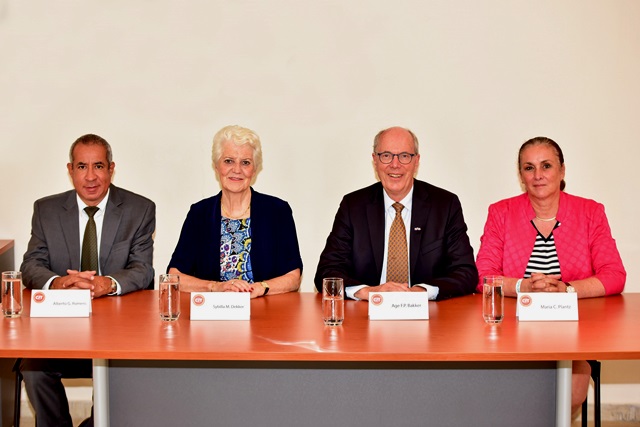 PHILIPSBURG – The Board of financial supervision Curaçao and St. Maarten (CFT) discussed the budgetary outcome for 2016 and the budget for 2017 with government officials.

CFT has not yet formally received the adjusted budget for advice. Based on the discussions it seems that the budget will be amended and sufficiently substantiated to be on the right track for 2017. However, progress still has to be made to keep the budget sustainable for the future.

Compared to 2016, the budget 2017 relies more on incidental income, such as contributions from government-owned entities. However, realizing additional and incidental income has proven to be quite a challenge in 2016, and therefore relying on this source of income poses a risk for the budget 2017. St. Maarten should therefore carefully monitor the execution of the budget so adjustments can be made during 2017 if necessary. CFT will give its final conclusions on the budget 2017 after receiving and analyzing the approved budget.

CFT expressed its concerns regarding this matter and advised Minister of Finance Richard Gibson to structurally increase regular government income by expanding the tax base and increasing compliance in the years to come. “An increase in structural income, a structural decrease in expenditures or a combination of both is necessary for a sustainable budget in the future,” said CFT Chairman Age Bakker.

During its visit on December 15-16, the CFT met with the Governor and the Minister of Finance, with whom the budget for 2017, and execution of the 2016 budget were discussed. With regard to the multiannual budget, CFT noted that the structural income was budgeted in a realistic manner for 2017 and 2018, but expressed concerns regarding the possibility to realize budgeted incidental income as well as income resulting from new policy initiatives, especially for 2018.

The CFT recognizes that a serious attempt was made to provide a balanced budget for 2017, and up to 2020, but substantiation could be improved in the future.

Executing a budget that relies on incidental income has already proven to be a real challenge during 2016. “Realizing this year’s budget will be a challenge on its own, however, may not be impossible after all,” stated the CFT chairman, referring to the large contribution from GEBE that was recently received.

This contribution by and large compensates for the shortfall of budgeted direct and indirect tax income because of the flat economy. The budgeted incidental income is also necessary for 2017, therefore the CFT will closely monitor this. Realizing both the budget of 2016 and 2017, are necessary to meet the requirements of the targeted instruction, especially regarding compensation for fiscal deficits of past years and dissolving the payment arrears. As to the latter the CFT has requested to be informed of the realized clearance of payment arrears as of December 31, 2016.

After receiving this report in January 2017, the CFT will advise the Kingdom Council of Ministers on the progress made with respect to the targeted instruction given in 2015.

Finally, the importance of financial management was mentioned again, as too little progress has been made. “Sound financial management is imperative in working towards sustainable government finances and ensuring the people of St. Maarten that their tax money is spent in an orderly manner,” Chairman Bakker concluded.

CFT also met with SZV, the Council of Advice, the Harbour Group of Companies and Princess Juliana International Airport (PJIA). Government policies and finances were discussed as well as the financial state of affairs of the government-owned entities and the risks they could possibly pose regarding the national budget.