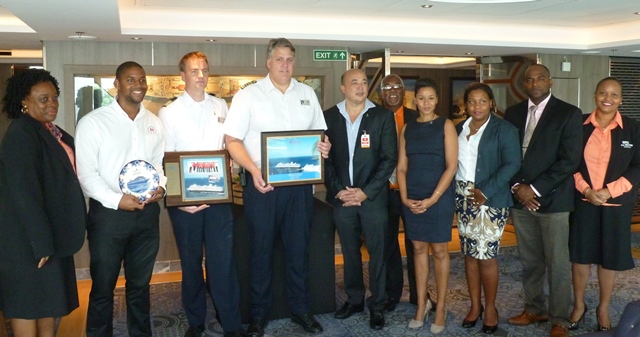 PORT ST. MAARTEN – On Saturday morning the fifth new cruise vessel on its inaugural call for the month of November ms Koningsdam of Holland America Line (HAL), was welcomed to the destination by a delegation from Port St. Maarten and stakeholders that included representatives from the St. Maarten Tourist Bureau, Dutch St. Maarten Taxi Association and the ship’s agent S.E.L. Maduro & Sons.

Captain Darin Bowland welcomed the delegation on behalf of his 3,100 passengers and 1,000 crew during the plaque exchange/welcome ceremony.  Captain Bowland pointed out how the port has grown over the past 25-years having first visited the destination when the old A.C. Wathey Pier was still in operation.

Captain Bowland was very pleased with the facilities that the destination has built and continued to upgrade over the years.  Mingo added that logistics with respect to the cruise sector was one of the key areas that the port continued to take the lead in making sure that St. Maarten maintained its number one position by keeping pace with trends and developments in the cruise industry. Investments in cruise facilities and infrastructure were the doorway to the island and its economy reaping the benefits of the industry which continues to produce larger and innovative vessels.

Port St. Maarten was the first port of call for the ms Koningsdam after it left Fort Lauderdale two days before.  The next port of call was St. Lucia followed by St. Thomas.

HAL took delivery of ms Koningsdam from the Fincantieri Shipyard, Italy in March 2016.  This is the first new Pinnacle-Class ship featuring innovative venues and new experiences.

Port St. Maarten officials and stakeholders were very impressed with the new amenities and features of the ms Koningsdam.  Guests have delight in new fine-dining options at alternative restaurants Sel de Mer, a French seafood brasserie, and an immersive farm-to-table concept dinner experience in the Culinary Arts Center, presented by Food & Wine magazine.

Grand Dutch Cafe debuts onboard with traditional Dutch treats and European beer, while a redesigned Lido Market with themed serving stations revolutionizes the buffet experience. A stunning main dining room is a focal point of the ship, and favorites return such as Pinnacle Grill, Canaletto Italian restaurant and pan-Asian Tamarind.

Onboard entertainment has been taken to a new level with the energetic Music Walk area featuring all genres of music showcased in venues including Lincoln Center Stage, offering chamber music nightly; Billboard Onboard, where live musicians rock the crowd with chart-topping hits; and the popular B.B. King’s Blues Club in the Queen’s Lounge, bringing the best of Memphis music to sea. With the 270-degree LED projection at World Stage, new concepts for show-time performances will immerse the audience in panoramic visual and sound effects.

ms Koningsdam set sail in April 2016 and is HALs newest cruise ship to join its fleet.  The 99,500-ton vessel can accommodate 2,650 guests and also has 1,036 officers and crew.  The debut of this new vessel represents a high point in HALs history.

ms Koningsdam is homeporting out of Port Everglades, Florida spending the 2016-2017 winter season exploring the Caribbean including destination Sint Maarten sailing seven to 11-day voyages up to March 2017.

Holland America Line is widely recognized as a leader in the premium segment of the cruise industry. The company’s fleet of 14 ships annually offers more than 500 cruises to 415 ports of call in 98 countries, territories or dependencies. From one-day mini-vacations to once-in-a-lifetime Grand World Voyages of more than 100 days, the line visits all seven continents to call at a variety of exotic, tropical, historical, cultural and adventure-filled destinations.

HAL has carried more than 11 million passengers from Europe to the New World and to vacation destinations across the globe since its founding. Today, it carries more than 800,000 cruise passengers a year.

HAL is headquartered in Seattle, Washington.