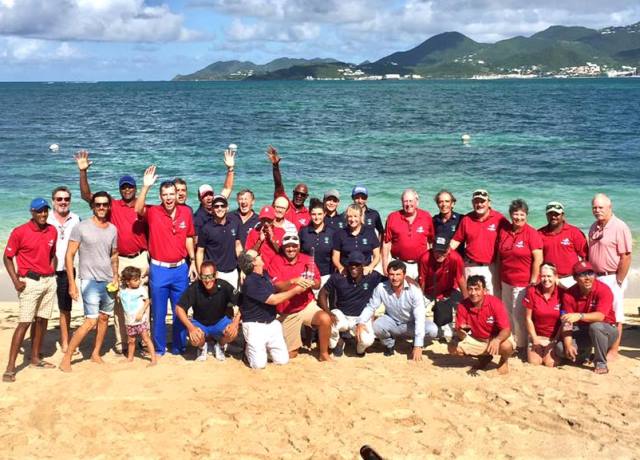 Dutch side team captain Howard Hobgood, also superintendent of Mullet Bay Golf Course, together with his staff did an excellent job of getting the course in perfect tournament condition. With an occasional refreshing downpour of rain, the best 18 golfers of the Dutch and French side faced each other during the weekend of the St. Maarten’s Day celebrations.

On Saturday morning, November 12, the format of play was foursome alternative shots and the Dutch side took a hard fought lead of 5.0 points to 4.0 points. While the afternoon playing format is a foursome best ball, the French side came storming back and at the end of the first day the French side had a commanding lead of 10.5 points compared to 7.5 points.

Sunday, November 13, being the final day, the format was individual play with 18 points up for grabs – one on one – unfortunately for the French side golfers they were not able to maintain the lead. Instead the Dutch team kept their cool and made an exhilarating come back. After all the single matches were finished the Dutch had regained the trophy after two years with 19.5 points over 16.5 points win.

After all the fierce battles on the course had come to a conclusion, the Dutch and French players all enjoyed drinks and lunch in great camaraderie at the Le Sand Restaurant.