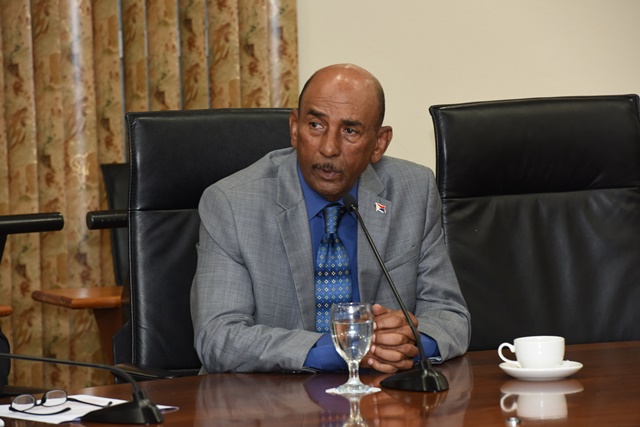 CUL-DE-SAC – The offices of the general pension fund APS were on Monday, November 14, the venue for several presentations made to St. Maarten’s Minister of Finance Richard Gibson Sr., by officials of the pension fund.

The presentations marked the Minister’s first official visit to the APS offices, during which the latter was welcomed by APS Chairman of the board Franklyn Richards and Director Nadya van Putten. The Finance Minister subsequently met the remaining members of the board and personnel present.

Following a tour of the APS offices, located at Yogesh Commercial Center, Minister Gibson was provided with in-depth information regarding many past, ongoing and future developments related to APS as St. Maarten’s general pension fund administrator. The Minister received confirmation that the 2015 APS budget and year report were submitted in a timely manner.

Among the fund’s present priorities are the execution of several local projects, which take into consideration the social and economic impacts for St. Maarten. As part of one such initiative, a model house of the Welgelegen Homes project is to be constructed this week while construction of the entrance to the project area will also commence this week.

An important aspect of the present scheme is pension reform with senior APS officials providing a comprehensive overview on the matter and how this ties into the ongoing projects such as the Mary’s Fancy project, the Welgelegen project, the planned construction of a vehicle parking building and a projected mortgage bank.

Important to APS has been the fund’s sustainability, keeping abreast of trends worldwide and the fund’s unwavering goal to have an affordable pension scheme for St. Maarten.