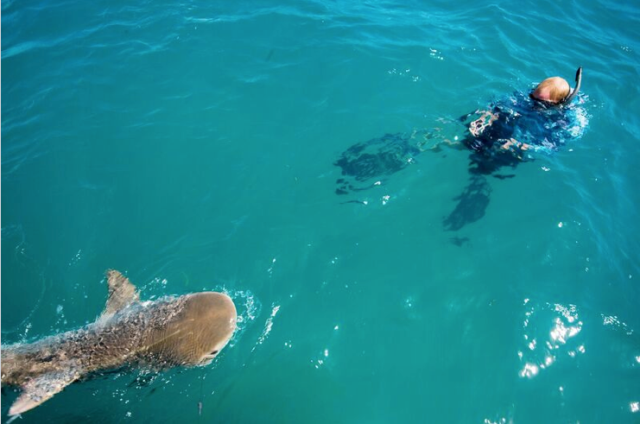 ~ Group Departs for Shark Research Expedition to the Saba Bank Yarari Sanctuary; to be Featured on Discovery Channel Sharkweek ~

Simpsonbay, Sint Maarten — The Dutch Caribbean Nature Alliance Save our Sharks Project has started its Shark Research Initiative on Sint Maarten two weeks ago, with renown shark scientists and Underwater Videographers joining teams from the St. Maarten Nature Foundation and the Saba Conservation Foundation in researching and tagging various species of sharks in local waters and on the Saba Bank. As part of this research the first tiger shark has been tagged with a satellite transmitter in the Eastern Caribbean.

“We are very happy to have our teams from the DCNA Network join with the Heithaus Research Lab at the Florida International University, the Sharks for Kids Foundation and Oceanic All Stars in doing this crucial and critical research into the status of our shark population not only for Sint Maarten and Saba but for the North Eastern Caribbean in general. We are therefore also very excited to have tagged the first female tiger shark with a satellite tag in the Eastern Caribbean here on Sit. Maarten,” commented Project Leader and Dutch Caribbean Nature Alliance Acting Chair Tadzio Bervoets.

On October 12, 2016 the team was able to successfully deploy a satellite tag on a 2.4 meter tiger shark, the first tiger shark to be tagged with this equipment in the Eastern Caribbean. With the Satellite Tag researchers are able to follow the animals’ movement patterns. “This particular animal, named Sea Fairy, has already transmitted data points and the team is very excited to see where she will go. She has already ventured close into the Anguilla Channel and is now headed to deeper water in the direction of Saba. This data is already starting to show that a regional mechanism for shark conservation and protection is crucial for the survivability of the species in the Caribbean,” continued Bervoets.

After a few successful days on the water off St. Maarten, the team has been able to tag multiple sharks including two nurse shark (Ginglymostoma cirratum), four Caribbean reef sharks (Carcharhinus perezii) and seven tiger sharks (Galeocedo cuvier).  When an animal is caught specific data is collected, this is called the ‘work up.’ This includes measuring the length of the shark, taking a small tissue sample for DNA and inserting a tag. The team is using four different tags depending on the type and size of the shark caught.

On the 15th of October the Team Departed for the Saba Bank, which is part of the Yarari Shark and Marine Mammal Sanctuary, to continue its research into shark populations. “We look forward to being a week on the expedition ship doing research which has never been done before. Another exciting component is that our work will be featured on Discovery Channel Sharkweek in 2017, which is a huge boost for highlighting our science and for the islands in general,” concluded Bervoets.

The Expedition Team would like to thank especially AutoBev, Cool Comfort Services, Safe Cargo Systems, Amerijet and Kwik Bargains for the incredible local support of this project.