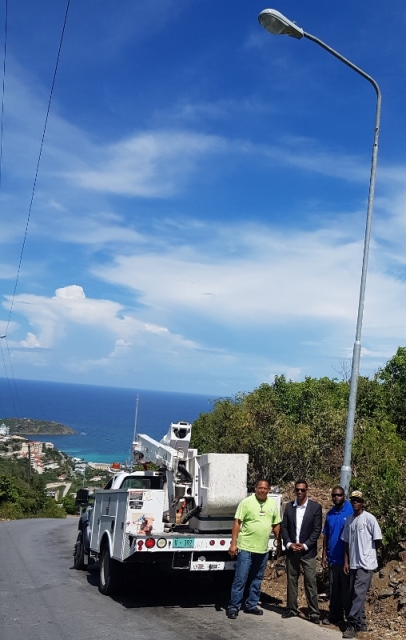 MP Lake was also on the site during the installation of the lights. “First I would like to commend NV GEBE for taking this initiative and putting lights in the area.  The road in this area is steep in some areas and there aren’t many houses in the area which for me was a security and safety issue.
“The residents brought it to my attention and I informed Minister Meyers who worked along with NV GEBE to make it a reality for the residents and visitors who have to drive through the area especially at night without any lights.  You have a number of resorts and villas in the Dawn Beach and Oyster Pond area.
“Finally we see NV GEBE is heading in the right direction with good leadership at the helm and addressing the issues of the community.  It is the simple things that make a big difference in the community.
“I also would like to thank the workers of NV GEBE who are working hard behind the scenes for the community.  Sometimes we criticize a lot but do not give Jack his jacket when good things are happening.  Congrats to the NV GEBE employees.”