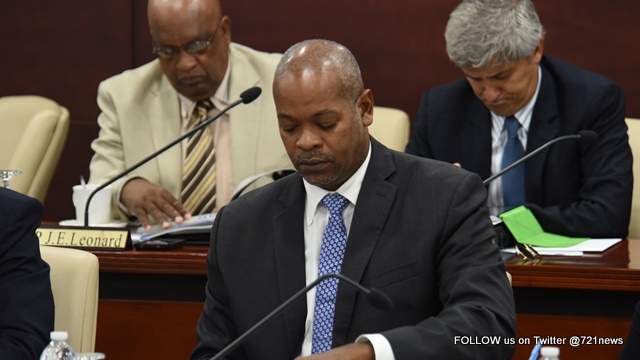 PHILIPSBURG— Member of Parliament MP Dr. Cornelius De Weever says “any elected official who does not respect the rules of Parliament, ought not to represent the people.” His comments came on the heels of allegations by the Democratic Party that he had been unnecessarily disruptive of parliamentary proceedings and had interrupted the Chairwoman of Parliament and DP leader MP Sarah Wescott during her remarks at the cessation of Parliament on Monday.

MP De Weever issued a press statement in which he said at times in the past “I have had to stand my ground firmly in defense of the right of the people of our Country and will continue to be a warrior for their interest, especially when others seek to put self above country.” He said though that he has always respected parliamentary rules and had advocated for improved rules especially where it pertains extra ordinary meetings of Parliament.

Feeling she had been wronged MP Williams party issued a press release following Monday’s closing meeting questioning whether De Weever was being deliberate in interrupting the Chair or he did not understand the rules in such a meeting of parliament.

Such a suggestion according to De Weever was preposterous and an outrageous attempt to distract from the positive message of unity he had minutes ago delivered as part of his closing remarks. De Weever said, “I am a firm believer in respect for basic rights and principles and the rule of law, and it was this same respect that prompted me to offer the Chairlady what was at the time a good intentioned suggestion on a way to give her uninterrupted time to speak since she was not listed as one of the persons to speak.”

The meeting records show MP De Weever was first of only seven MPs listed to speak at the closing of Parliament on September 12th. Second was, MP Frankey Meyers followed by MP Frans Richardson, MP George Pantophlet, MP Leona Marlin-Romeo, MP Maurice Lake and finally MP Silvio Matser. Each MP was given a time of five to eight minutes to make their closing remarks and no records showed MP Williams on the list of speakers.

Although she had already made an elaborate introductory statement prior to allowing the MP’s to speak, she again chose to pontificate after the MPs speeches at a moment when the Chair of Parliament would normally have officially closed Parliament and end the Meeting. She started to respond to some of the comments made by the seven MP’s during their closing remarks and in recognizing this De Weever asked for a point of order which the Chairlady granted. He rose and offered as a point of order that the Chairlady yield her position to MP Pantophlet and be added to the official list as a speaker, which would have allowed her to speak uninterrupted as was the case for the seven MPs who spoke.

De Weever said it was never his intention to be disrespectful but he was simply following the rules of order in the absence of any being in place for extraordinary meetings. He explained there are no clear rules for an extraordinary meeting and in fact said he has been asking, for some time now, to have rules created and added as part of the planned changes to Parliament’s Rules of Order. He said “We should remember that the change of Government happened after hours when the previous chair was changed in an extraordinary meeting.

As Minister, De Weever held an impeccable track record and has worked well with the various departments he oversaw.  He has also had an outstanding record in parliament as a champion of the causes of the people of Country St. Maarten. He said it is unfortunate that even an act of kindness could be misconstrued, or be used as a ploy to grandstand and attempt to tarnish the good name of certain individuals when their record shows otherwise.