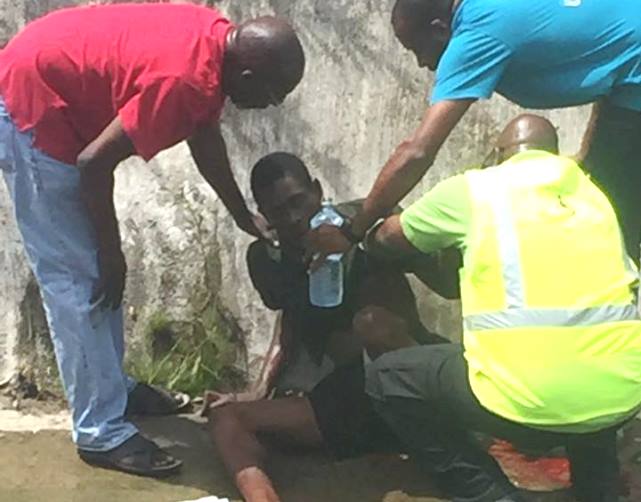 On Thursday September 1st at approximately 01.30 p.m. a call came into the Emergency Dispatch about a stabbing that had taken place a few minutes earlier in the vicinity of Delta gas Station in Dutch Quarter. The caller also stated that the victim was bleeding profusely. Immediately after receiving this call several police patrols, paramedics, Detectives and Forensic Department were sent to the scene to investigate what exactly had taken place.

On the scene the investigating officers learnt from witnesses that a heated argument had taken place between the suspect and the victim which escalated into a fight. During the fight the suspect who was in the possession a knife used it to stab the victim. After committing this act the suspect fled the scene. The area was immediately closed off by police in order for the Forensic to collect evidence while the detectives interviewed witnesses.

Paramedics on scene attempted tirelessly to save the victims life, but he died of the wounds he had sustained. A medical examiner arrived on the scene and pronounced the death of the victim. The victim in this case has been identified with initials A.H. The body of the victim has been confiscated and transported to the morgue for further investigation.

The suspect was later located and arrested by police in the Dutch Quarter area and was brought to the Police Head Quarter in Philipsburg where he remains in custody for further investigation. The suspect was identified with the initials F.B. Both the victim and the suspect live in Dutch Quarter.

The investigation is in the preliminary stage and many details about this case are still unavailable. When these details become available the media will be informed in a subsequent press release.

Detectives are presently investigating a case involving a man with initials M.C. (31) who was arrested by police on Tuesday August 30th at approximately 07.15 p.m. on Rhine road. The man in question was arrested suspected of theft of a vehicle and fencing of stolen items. During the arrest of the suspect he resisted heavily, but was put in handcuffs shortly after.  He was also charged with resisting arrest. Two Hyundai I-20 vehicles were also confiscated by police for further investigation. The suspect was taken to the Philipsburg Police Head Quarters where he remains in custody.